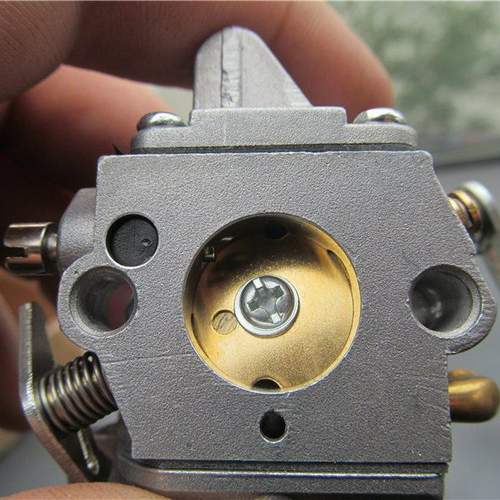 1) STIHL MS 180 chainsaw malfunctions: The gas key wedges, and over time the gas key completely stops moving.
Cause: A coating of translucent resin on the axis of the throttle of the carburetor, which leads to jamming of the throttle mechanism. Resin is formed when gasoline dissolves the poor-quality air damper coating.
Chainsaw troubleshooting: Clean the carburetor throttle axis with acetone and tin the air damper itself.

Read more:  The Better To Sharpen The Chainsaw Chain

5) Chainsaw malfunctions: Chainsaw starts poorly, does not work well.
Cause: “Fills” the candle with gasoline due to sticking of the needle in the carburetor or the rocker is raised high.
DIY chainsaw repair: Rinse and blow out the carburetor, set the rocker correctly.

It either sucks in air somewhere, or something is clogged.

The main ways to troubleshoot STIHL MS 180 chainsaws are to disassemble, rinse and blow out the carburetor, change the fuel filter in the tank, check the fuel hoses for cracking (they can suck in air).
There is only one adjustment screw on the carburetor. idle speed (it happens, turned it, and the chainsaw again worked).
The connection of the carburetor with the cylinder, in terms of air intake, is reliable. there is a plastic ring (no gaskets are needed).

Immediately after the start-up, the chainsaw runs at high speeds, and if you press the gas, instead of starting to accelerate, it “chokes” and even stalls. Or it starts poorly, does not gain momentum and stalls (this malfunction of the chainsaw also applies to other expensive chainsaws with an accelerator pump in the carburetor).

Read more:  How To Repair Stihl Chainsaw? Do It Yourself!

Cause of chainsaw malfunction: Deterioration of a rubber cuff on a piston of the accelerating pump in the carburetor (fuel accelerator). This leads to air suction by the accelerator pump and the main jet delivers a lean air-fuel mixture (little gasoline in the mixture) into the diffuser and the chainsaw first runs at high speeds, and then “chokes” and stalls. This happens after 2-3 years of operation and usually happens in the hot summer months.

Remove the carburetor from the chainsaw. Remove the fuel pump cover with the diaphragm by unscrewing one screw in the center of the cover. Then turn the carburetor to yourself with a throttle, on the side where there are two holes, a pin is visible in one, here under it there is an accelerator pump. Remove the retaining ring from the outside of the pin and detach the air spring of the air damper. Unscrew the screw in the center of the throttle, remember how the throttle is (to put it later) and remove the throttle. Finger plug the hole with the pin (the accelerator is spring-loaded and if you remove the throttle axis and do not close the hole, the accelerator will pop out), then rotate the throttle axis and remove it. Shake the accelerator (piston) with the spring out of the hole. On the piston there is a rubber cuff (ring). its wear is the cause of the malfunction of the chainsaw. It is necessary to replace the piston with a rubber cuff and a spring (they are sold as a repair kit). Or you can take out a worn piston with a spring and plug the hole by pushing the rubber plug there (the chainsaw will be without an accelerator pump, i.e. it will accelerate not in 3 seconds, but in 4 seconds, but it will work well since there will be no suction air carburetor).

Read more:  Tuning The Carburetor Of A Chinese Chainsaw

Assembly after troubleshooting a chainsaw (after troubleshooting a carburetor chainsaw) is in the reverse order of disassembly. When assembling the throttle valve, before tightening the screw, the throttle valve itself must be correctly positioned so that it does not jam, and the thread of the screw attaching the throttle valve to the axis should be degreased and greased with a special thread sealant (sold in small tubes, red, liquid) or flattened with pliers, because if this bolt is removed during operation, it directly enters the cylinder) and repair or replacement of the piston cannot be avoided). So we examined the elimination of this malfunction of the chainsaw.