How to start a STIHL chainsaw

All STIHL chainsaws are equipped with two-stroke engines, the cold start of which has a similar algorithm. But there are models on which additional equipment is installed, allowing you to start the saw without excessive efforts. For this reason, the algorithm for starting them may differ slightly.

Let’s take a look at how to start a regular saw and how the process differs from starting a modified model.

How to start the saw after long periods of inactivity

The fact is that a successful start after downtime must be taken care of in advance and the saw should be properly prepared for storage. According to the manufacturer’s instructions, before storing, it is necessary to drain the fuel from the tank, then start the engine and burn off the fuel in the fuel system.

Preparation is necessary so that during storage, the carburetor membranes do not stick together. Performing this simple operation will allow you to successfully start the saw after long-term storage.

It is much easier to start the chainsaw six months after idle time, if just before starting, through the spark plug hole, add 1. 2 ml of the fuel mixture to the cylinder. This can be done with a syringe.

The fuel supply system in the STIHL MS 211 C-BE chainsaw is additionally equipped with a manual fuel pump, which makes it easier to start the chainsaw on a cold.

The instruction for starting this model of the STIHL chainsaw contains one additional point, which is that before starting the chainsaw on a cold one, it is necessary to pump fuel into the carburetor using a pump. Further, the instruction does not differ from starting STIHL 180 and follows the same algorithm.

What happens at the moment of priming fuel with primer, and how it helps to start the saw more efficiently?

At the moment of starting the saw without a primer, several movements of the starter are carried out only so that the fuel pump, under the action of an impulse from the saw crankcase, pumped fuel into the carburetor.

A pump installed in the fuel line allows you to manually pump gasoline into the carburetor without unnecessary movements with the starter. The effect of this action is obvious, the saw will start much faster.

Many owners of gasoline-powered tools mistakenly believe that a hand pump can overly pump fuel into the carburetor and, for this reason, flood the candle. This is fundamentally wrong, since the system is capable of circulating around. Excess gasoline from the carburetor will be directed, through a dedicated hose, back to the tank.

There is no need to use a primer on a hot chainsaw, since there is enough fuel in the carburetor to start.

The STIHL MS 180 chainsaw, as standard, is not equipped with any additional devices that can facilitate starting.

Below you can see how to start STIHL 180. The video reflects in detail all the main points, and the author’s Комментарии и мнения владельцев allow you to understand the whole process to the smallest detail. 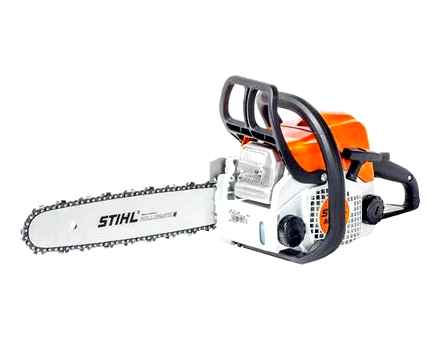 The device of this model, in comparison with the previous one, has some differences in the trigger mechanism, but it does not carry any changes in the triggering algorithm. The fact is that the ErgoStart system is installed in the STIHL 180 C, which, due to an additional spring installed in the chainsaw starter, reduces the engine resistance when starting.

Read more:  How to Start a Gasoline Trimmer Video

How to start a chainsaws with a decompression valve

After the first flash has passed, the valve will be set to normal operation, respectively, after the engine control lever is set to the open air damper position and starting continues, the decompression valve must be pressed again.

The valve operation is schematically shown in the figure below.

In fact, the valve does not make starting faster, it just simplifies the process and makes it more comfortable, because for during launch, a person will have to apply significantly less effort.

A saw with a decompression valve, whether the engine is cold or hot, must be started using the valve to relieve the cranking force of the engine. This will significantly increase the service life of the starter and reduce the number of torn laces, since it is installed on chainsaws with a large cylinder volume and, accordingly, compression.

Briefly about the launcher

The chainsaw is powered by an internal combustion engine. This is a simple device, the design of which does not have any special bells and whistles. It usually works properly even in difficult conditions.

Functioning is provided by structural elements:

If you cannot turn on and start the chainsaw

When all actions are performed in accordance with the established order, and the chainsaw does not start work, then there are malfunctions in its mechanism. Usually the cause of this phenomenon is common and easily fixable problems, such as lack of spark, shut off the fuel supply, clogged filter that allows air to pass through. In order to start the chainsaw, you will have to find the cause and take the necessary steps to eliminate it. 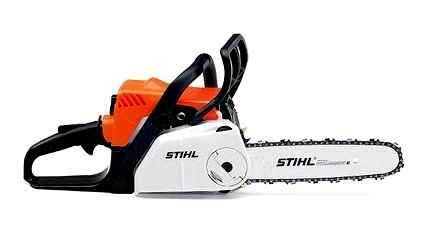 Only correct actions should be taken. If a person does not know what to do, there is no need to commit rash acts. It is forbidden to disassemble the device, you need to be especially careful with the carburetor. You cannot unscrew any screws on it, since if its device has caused a breakdown, then it is impossible to repair the chainsaw without professional equipment.

The actions that need to be performed in a strict order are listed. Only during the transition from one measure to another can the exact cause of the malfunction be determined and quickly eliminated without damaging other parts. Algorithm of actions performed in case of failures in the establishment of a chainsaw:

This means that the ignition unit is damaged, and the chainsaw needs professional repair. Sometimes there is a malfunction of the ignition unit even in the presence of a spark, therefore, this criterion cannot be followed to eliminate the likelihood of breakage.

When a spark appears when it is not possible to make the device work, you must continue to perform the steps described below.

Getting the Stihl MS180 chainsaw up and running

Read more:  What Do The Numbers On The Chainsaw Mean

In case of any damage to the cylinder walls, it can be concluded that it will have to be repaired by professional methods or replaced with a new one. Usually, an insufficient concentration of oil in the fuel leads to such malfunctions.

How to start a STIHL chainsaw (STIHL MS-180). the first start and start without a starter

Chainsaws differ slightly in design features, however, in most cases, the assembly principle is carried out according to two standard schemes. For many devices, the instructions contain information on the need to activate the emergency brake before starting the activation procedure. You should first master the device of the plant and study the main ways of correcting breakdowns, then a person will have the opportunity to fully operate the device. The article will talk about how to start a chainsaw.

When the brake is activated, the assembly process is much slower, so everything is also safe and more comfortable, you can turn on the mechanism without the use of braking equipment.

If a person is not sure of his knowledge and accuracy, then the brake, on the contrary, needs to be activated. With the correct procedure, the device will not start, the mechanism will not perform actions that are dangerous to humans.

1 diagram of a standard mechanism

In our rating of chainsaws by quality, you will find all chainsaws with an optimal price-quality ratio.

Our other article will also help you to make your choice in favor of a particular brand of chainsaw.

2 diagram of a standard mechanism. how to start the saw correctly

Read more:  Why Does The Oil Run From The Chainsaw

When the device stalls constantly, you need to systematically start it up again (see what to do when the chainsaw stalls when you press the gas). After a while, the motor will pick up speed and be able to maintain active work without interruption.

The chainsaw should be started following the standard instructions. If there are any problems with the operation of the device, for example, the chainsaw does not start, it is necessary to quickly eliminate them or take the device for repair, and in order to identify malfunctions and work correctly with the chainsaw, you need to know the features of its design. To learn how to quickly turn on the device and fix breakdowns, it is enough to study the basic range of necessary actions and follow it. Read about how to properly run your chainsaw before starting it for the first time.

STIHL-180 does not start: reasons and remedies, why the chainsaw fills the candle, gasoline does not flow to the cold

How to adjust the carburetor on a Husqvarna chainsaw (Husqvarna). tuning and adjusting the saw

General rules for using a chainsaw

The basic rules for operating the tool are the same for all brands. STIHL 180, Echo, Ural, and they are as follows:

How to start a new chainsaw?

Before starting a new chainsaw, clean it of the preservative, check the complete set, the reliability of the fasteners tightening, and the chain tension. Before intensive use, the tool must be run in. This should be done not at idle, but at low load, which will avoid rapid engine wear.

The start of the tool is carried out using a starter, which in many models is connected to an inertial or spring-type light start system. With correct adjustment of this mechanism, the force applied to start the motor is almost halved.

To extend the operating life of the starting device, you should work out a smooth movement, in which high loads will not be created.

The first launch is performed in this order:

At the factory, the carburetor is adjusted according to average parameters. Therefore, they are brought to optimal values ​​already during the operation of the chainsaw. The motor must work without interruptions, not emit extraneous noise. For a full lapping of all systems and parts, moderate loads are used.

How to start a chainsaw correctly?

Chainsaws can be started in different ways, depending on the model and technical condition. Today we will look at how to start a chainsaw without a starter, what to do if the tool has not been used for a long time. In any case, before using the tool, you should carefully study the instructions, follow the operation and safety rules.

How to start the tool after a long period of inactivity?

After long-term storage, you may encounter some problems when starting the motor. The first thing to do is to make sure that the equipment is in good working order, there is a spark, fuel, and there are no wire breaks.

If the saw is in good working order, its launch is in progress: