Different materials and their features

Styrofoam. Perhaps this material is the most fragile, it is unstable to mechanical damage, scratches and even minor impacts. Of the advantages, light weight, the ability to paint in various colors and ease of processing (it can be cut with a clerical knife, however, very carefully).

Expanded polystyrene. This material can be considered a kind of foam, however, its strength characteristics are slightly higher (extruded polystyrene foam is denser than foam). With regard to processing, expanded polystyrene is just as easy to cut with an ordinary sharp knife, and also has a low weight, and this is an important factor when considering the load on the walls.

Both polystyrene and expanded polystyrene have one significant advantage: the softness of the material allows you to press the plinth as tightly as possible to the corners and to each other, as a result of which there are no gaps. In addition, modern polystyrene skirting boards are made in such a way that they have a small recess specifically for hidden wiring.

Useful. Polyurethane stucco molding can transform the appearance of a standard apartment into an elegant, stylish interior.

Important! To cut the inner corner, the fillet should be placed on the bottom of the miter box with the upper part of the one that will stick to the ceiling. In this case, the lower part of the plank should be firmly pressed against the wall of the tray.

Step 1: correct measurement of the length of the plinth according to its markings on the wall, drawing a notch with a pencil on the material for the future cut.

Step 2: installation of material in the miter box. The correct placement of the plinth in the tray will determine the correct cutting of the fillet edges, and, accordingly, the accuracy of their placement on the ceiling.

Step 3: after the plinth is installed and tightly fixed in the miter box (you can just press the material firmly with one hand), a hacksaw is put into the groove under 45. The material can now be cut. The edges of the second skirting board, which will be installed adjacent to the first, are cut in the same way, only as if in a mirror image (the skirting board is installed in the opposite direction, the edges are also trimmed at an angle of 45).

Read more:  How to properly cut the corner of the ceiling plinth

There are two ways to cut corners with and without a tool (miter box). We’ll cover both methods.

The miter box is a carpenter’s tool, which is a small rectangular tray (you can make it yourself from wood or purchase a ready-made one from plastic or metal), in the walls of which there are grooves. The slots guide the hacksaw blade at a specific angle to the axis of the tray. 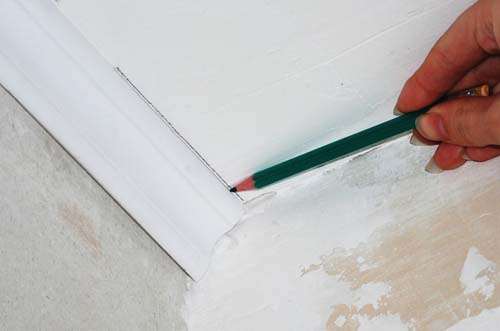 The miter box is a simple carpentry tool that allows you to cut the workpiece at the desired angle. Most often it is a plastic, wood or metal tray with vertical slots for cutting at an angle of 90 and 45. There are also more complex miter boxes for cutting at 90, 60 and 45 degrees. For more professional work, a miter box with a swivel mechanism is used, where the hacksaw can be fixed at any angle to the workpiece.

Read more:  At what degree to cut the ceiling plinth

How to cut a ceiling plinth with a miter box:

Next, we join the trimmed plinths and check the cutting accuracy. For a more accurate orientation, they also say that to complete the inner corner, it is necessary to start cutting from the front of the skirting board. Wooden skirting boards will most likely need to be filed after trimming.

How to cut a ceiling plinth with a miter box outside corner:

Trimming the workpiece with a miter box is only suitable if the angle between the walls is even 90 degrees. If the accuracy is poor, you will have to use other methods.

What is it made of and what is it called

The very first skirting boards on the ceiling were made of plaster. They were cast in special molds and then installed on the ceiling with mortar. Such figured decorations were called fillets. Today you can rarely see them: they are expensive, and outwardly they are almost indistinguishable from the cheaper options. And the name is almost lost.

The most popular ceiling skirting boards are made of polyurethane or polystyrene. They are inexpensive, look great, easy to install, have a wide range of profiles and patterns. The width can be from 5 mm to 250 mm. They are used in almost any room, decorated in any style. An exception is wooden houses with a suitable interior. Wood products are most often used here; the style dictates its own terms.

There is also a similar plastic finish. It is mainly installed in bathrooms. But even in damp rooms, you can safely mount polyurethane strips, they are not afraid of dampness.

Read more:  How to remake a 12 volt electric screwdriver battery

You need to cut the ceiling plinth in the corners of any material in one of the ways described below. The only exception is plastic skirting boards: you can arrange such a corner only using ready-made corners.

How to cut ceiling plinth in corners

The quality of the ceiling finish greatly affects the appearance of the room. Therefore, they try to do everything perfectly, or very close to it. The finishing touch to the design is the ceiling plinth. They give the finish a complete and holistic look. The strips themselves are mounted on flat surfaces simply: on special white glue, but problems arise with the design of the corners. Without knowing how to make the corner of the skirting board correctly, a lot of material deteriorates. We will tell you about how and what to cut it in the corners.

Trying on the ceiling plinth: the joining of the parts should be perfectly flat. If the result is not achieved and there are irregularities at the joints, you can trim the edges with a regular knife to a perfect fit.

The first way with a miter box

The miter box usually looks like a tray with vertical holes for a hacksaw. It can be made of wood, metal or plastic. This tool represents the oldest and simplest carpenter’s tool, designed for cutting wooden parts at an angle of 90 and 45. There are types of such a device for professional work, with a swivel mechanism, in which the cutting tool can be rotated and fixed in any position.

Ceiling corners are divided into internal and external, the method of joining them is slightly different.

How to cut the corner of a ceiling plinth straight