Hello everyone! The question of how to insert a drill into a puncher can mean two different things to different people:

This article will highlight both aspects.

How to insert a drill? 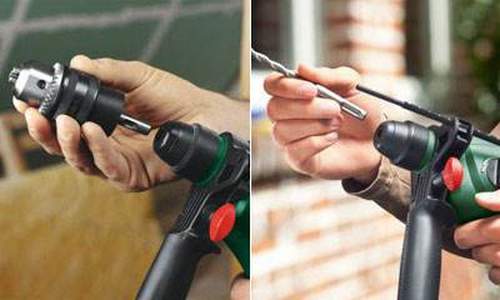 A simple, it would seem, question, which, however, may present some difficulties for inexperienced users who first hold a hammer drill in their hands.

There are two installation methods.

The second. on cheap Chinese units. This, for example, Caliber, Bison, Patriot, Kolner, Omax, Whirlwind and a bunch of others. True, it is worth saying that among them there are models where installation is also carried out in a more convenient first way.

Video: How to Insert a Drill into a Puncher?

In this case, extraction in both cases is carried out by pulling the skirt towards the body.

How to insert a drill drill into a hammer drill?

In this case, you will have to use an adapter. It is an ordinary cartridge like an electric drill (key or quick-clamping. no difference), into which an adapter is screwed in, one end of which has a thread, and the other has nothing but the same shank as the drill.

Cartridges can be with different threads. Usually, for our case, they are used either 1/2 inch or metric M12. Accordingly, the adapter should also have a similar threaded fit.

Now the assembled structure needs to be thrust into the hammer drill just like the drills are installed in it. And in the end, we get, in fact, an electric drill, which, however, the cartridge will have some backlash.

You do not need to work in shock mode. the assembled adapter will not stand up and will quickly fail.

Lucky for those who bought the unit immediately with such an adapter. In addition, there are such models of perforations that have two chucks replacing each other. one for drills, the other for drills.

The advantage of this configuration is that in this case there is no backlash that is available when using the adapter. So the puncher is already becoming a completely full drill. But overpay for such a model, of course, have to.

That’s actually all the information on installing drills and drills in a punch. I hope it was clear. I say goodbye to this. until we meet again!