The drill mixer is an excellent assistant to any builder. Such devices have a fairly powerful engine and two ergonomic handles, which are necessary in order to hold the tool while mixing mortars and mixtures. This is a convenient mechanism that combines several important functions at once.

The construction sector of the industry does not stand still. every year there are new compositions that are used for the construction of structures, minor and major repairs. And glue, and plaster and many other materials go on sale in the form of a powder that must be diluted with water in order to make it a complete composition.

In order for the components of the mixture to mix as qualitatively as possible and make up a homogeneous working mass, it is necessary to choose the right tool. For example, if you can knead wallpaper glue with ordinary PAL-KOi, then for cement mortars and putties which method will be ineffective, especially if you need a large volume of mortar.

Kneading construction mixtures with improvised means, as a rule, does not give the desired quality of the working composition: a lot of lumps are formed in it and a large percentage of dry matter remains, which could not get wet properly.

Many users in such situations resort to a punch, which has the necessary ability to rotate; Nonetheless experts do not recommend using this method, since the perforator is initially oriented to loads in a different plane without any influence of radial forces. Of course, you can knead a small volume of the solution with it, but in large quantities you run the risk of simply disabling your tool, which, incidentally, is quite expensive.

An excellent solution in this situation may be the acquisition of a drill mixer, which is optimal for kneading compositions in a volume of up to 15 liters in one go.

Such devices are optimal both in everyday life and during professional repairs. Unlike the punch and the usual drill, they have a stronger bearing, in addition, the mechanism is equipped with a powerful gearbox, which is protected by a particularly durable metal case. Thanks to this configuration the device can work even at the lowest speeds.

An important plus is the fact that such the construction mixer can simultaneously perform the function of drilling a surface, that is, in fact, is a 2 in 1 device.

Types of structures and their characteristics

The drill mixer is used for repair work in large volumes; when mixing the solution, the user usually holds it in his hands, because the device has ergonomic handles that make the operation of the tool less time-consuming. If the device’s engine has a power of more than 1 kW, then a special gearbox is built into it: it is suitable for use not only at the very first speed, but also when switching from the first to the second.

The first is used to make dense dense mixtures, for example, mastic, and the second. for gypsum and cement. At the second speed, stirring of paints and varnishes and other liquid substances with minimum torque is also permissible.

Video: How to Make a Drill Mixer

In order to make the work more comfortable, it is better to use tools that are supplemented by a speed stabilizer or inrush current limiters.

These are very important options: thanks to them, when pulling the device out of the resulting composition, the torque remains at its original position and no spraying of the finished mixture occurs, as is the case with many other mixers.

Such drills, as a rule, have different configurations. Usually they come with several varieties of nozzles, which can take several forms. 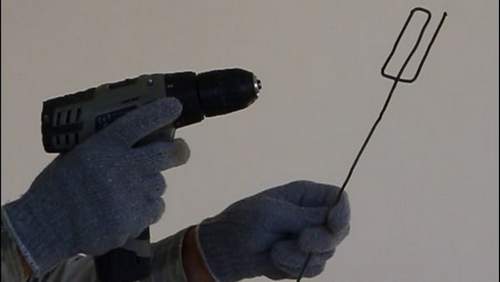 The main advantage of the drill mixer is the possibility of its multifunctional use. On the one hand, the tool is classified as a drill, therefore, in addition to kneading mortars, it can be used to form holes in surfaces of various types, even the hardest and densest. On the other hand, a drill of this type belongs to the category of low-speed ones, therefore it cannot replace the drill with 100%, but at the same time it is precisely low revolutions that make it possible to knead even the most dense compositions.

It’s obvious that such a design cannot be used in industrial volumes, its power and design features are not enough to cope with intensive operation. But she will cope with the solution of small domestic tasks for minor repairs and decoration of an apartment or private house in full.

Such a drill weighs much more than a conventional one: its weight is more than 3 kg, so frequent drilling with such an aggregate is associated with considerable physical effort.

The principle of operation and features of use

Depending on the principle of action, three types of tools are distinguished:

A conventional electric drill mixer is a low-speed shock-free mechanism. The power of this tool ranges from 500 to 2000 W, there are 2 convenient handles, a fairly large cartridge with a diameter of up to 16 mm.

Two-handed models are divided into variants with a single whisk or with two, the difference follows from the name: mechanisms with two whisks mix even the most viscous mixture, they are equipped with a rather powerful gearbox and can easily cope with solutions of various consistencies. from light to concrete.

The most popular consumers are drill mixers of the following brands.