These ten simple and useful tips will save your nerves and of course money. You made your choice and bought a cool circular saw. it’s time to try it out!

Let’s make something useful for the house from glued plywood. Maybe a bookshelf, or maybe just such a versatile little bench. No matter what, the main thing is how to do it.
Where do you need to start? And we start with the fact that you brought a large sheet of plywood, and you need to saw it with a circular circular saw into smaller parts.

Important! Do not forget to use personal protective equipment when working with a circular saw. at least glasses. Sawdust fly in all directions and at a fairly high speed!

Saw a sheet of plywood with full bottom support 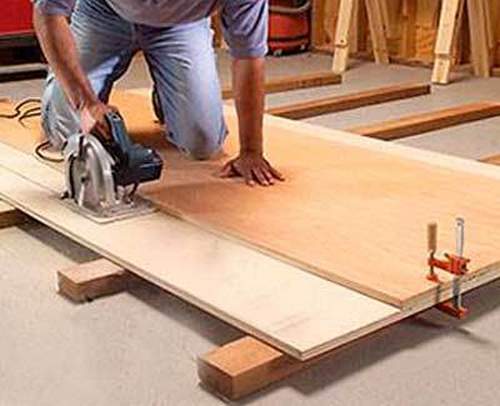 This is best done on the floor. You can, of course, and on such auxiliary goats, but if you want to get the highest quality cut, then still on the floor.

Place several boards under the plywood sheet in size and, having measured the sawn part, lay the guide on top of the plywood and fix it with clamps. This technique will give you a guarantee that at the end of sawing a piece of plywood does not break off and it does not move anywhere in the process.

The boards should be the same thickness and should be laid across the cut, as in the photo on the right. Yes, you have to sacrifice several boards, but the cut in them will not be deep, but why, read the next tip.

Correct setting of the depth of cut will give you a more accurate cut and less noticeable traces (curls) from the saw blade at the end of the plywood.

Read more:  How To Saw With A Circular Saw

Set the disc exit size down on your circular saw so that the carbide tip on the tooth exits no more than half of the plywood.

This setting of depth allows the disc not to chop wood, but to carefully cut it.

Keep in mind that the highest quality cut edge on plywood will turn out from below, so plan to cut the part so that its front side is from the bottom.

Set the guide to the size of the sawed part

An important problem is to set the guide along which the saw will go.
To do this, measure the base size. the length from the edge of the saw blade to the edge of the steel sole of the circular saw and write it somewhere, for example, on the wall of the workshop. it will come in handy!
Next, you need to make markings on a plywood sheet: the width of the sawed part, the thickness of the saw blade itself and plus the base size.

According to the size drawn, install the guide and fix it together with a piece of plywood with clamps.

To prevent damage to the surface of the plywood sheet, place the clamp legs under them, for example, pieces from old plywood.

Following a wise saying, attach the saw to the intended cut and see if everything matches?

The next step is the opening cut 3-5 mm.

Video: How to Saw Circular Without Chips

Check that the cut made matches the marking.

Under normal conditions, the saw blade should go lightly and gently. If it is tight then either the blade is dull or you are driving the saw too quickly.

Read more:  Which Hacksaw Is Better To Cut Chipboard

For a smooth and beautiful cut during sawing, do not stop. Make sure in advance that the power cord from the saw cannot catch on the corners of the plywood sheet or clamp. If the sheet is large, then it makes sense to climb onto it.

The cleaner you want to cut, the more teeth should be on the disc. While the disc is new and sharp, then, in principle, any of the four presented in the photo on the right will do.

For a clean sawing of plywood, a disk with 140 teeth is good for everyone, but its drawback is that its teeth are blunt much faster than those that have refractory tips, especially when sawing chipboard sheets. It is better to keep such a disk in stock for critical work or when you need to make a very precise and thin cut, and not use it for everyday work.

The most convenient, however, like the most expensive of the presented disk with 56 teeth or the so-called disk for the laminate.
Well, for domestic work and for all occasions, for example, for summer crafts, a disk with 40 teeth is quite suitable.

Sticking the tape to the place of cut will significantly reduce the likelihood of chips at the top veneer of the plywood sheet. As such a tape, you can use masking tape. Unlike household, it does not leave traces of glue on the surface.

Glue the tape directly to the place of cut. After a piece of plywood is cut, the tape should be removed towards the cut at an angle of 90 degrees and only so.

The adhesive tape cannot be pulled up, to avoid peeling of the top veneer!

If the surface of the material to be sawn has a glossy structure, such as a laminate, then to avoid scratching, also glue the sole of the circular saw.

Cutting the board or trimming a small fragment is quite simple. the sawn piece will simply fall if, for example, you are sawing on the goats. But sawing a long board in half is significantly different, especially if it is thick and you need a neat cut.

Read more:  How To Sharpen A Circular Saw On A Tree

The trick of this cut is to let the end of the board fall slightly, but not so much that it falls off before you finish sawing.

One of such methods in the picture on the right. You just need to put small pieces of rail under the board.

When it is not possible to start cutting from the edge, the only solution is to “dip” the disc into the plywood sheet. Here the main danger is a return strike, so you should carefully prepare for the execution of such a cut.

First attach the disconnected saw to the place of cut and mark the front point so that the back of the blade coincides with the corner point of the cut. (fig. 1)

Holding the saw firmly, place its base at an angle to the marked front point. Align the disc visually with the cut line. For safety reasons, try to get up so as not to be behind the cut line, but slightly to the side.

Turn on the saw and let it gain full speed. Gradually, without strong pressure, start lowering the disc into the plywood (Fig. 2).

When the flat base completely rests on the plywood, continue cutting forward to the front corner (Fig. 3).
Only take out the saw when the blade stops completely.

How to cut a small piece of board without goats

If you need to cut a small piece from a heavy board, then sometimes it is easier to do in the place where they are lying, and not drag a heavy board onto the goats.

The easiest way to do this is to put the edge of the board on the toe of the foot and lean it on the shin. Then, according to the marking, align the saw and make a cut.

The safe distance from the cut to the leg should be at least 30 cm.