Wood is a unique natural material that is very widely used in various sectors of the national economy. It is easy to process, it is environmentally friendly. For processing, a wood hacksaw is often used. an easy-to-use tool that does not require special possession skills. Nowadays, electric saws, jigsaws and other power tools have received wider application than wood hacksaws.

Nevertheless, traditional hacksaws are found in all workshops, in every household, as they are used for quick cutting without long preparations. They are not only sawed with wood, but also used in the processing of chipboard, plastic, various types of flooring and so on. If you need to perform work that does not require the connection of powerful equipment, or if the access of the power tool to the object is difficult, there is no alternative to a hand-saw-hacksaw. Of course, to achieve high results, any saw needs timely sharpening.

Why and when to sharpen?

Qualified specialists know the following symptoms, indicating the imminent failure of the saw:

Breeding of teeth must necessarily precede the process of grinding teeth. When breeding, the deviation of the teeth from the plane of the hacksaw to the left and to the right at a certain angle should be achieved. Too small deflection angle of the tooth will lead to the fact that the teeth will be "planted" in the tree. And, on the contrary, too large a deflection angle of the teeth makes the cut too wide, increases the amount of waste (sawdust) and requires too much muscle energy for stretching the hacksaw. The purpose of sharpening teeth is to restore the following tooth geometry:

Important! Hardened prongs cannot be sharpened. They are black with a bluish tint.

During the breeding of the saw, one should not forget about the uniformity of the bending of all the teeth at the same angle so that there is no increase in resistance to broaches and high wear of the metal. It is necessary to begin to bend the teeth from the middle. If you try to bend them at the very base, you can damage the blade. The teeth deviate from the blade through one, that is, each even tooth to the left, each odd to the right. Visually and without the use of tools, only an experienced carpenter can determine the wiring. Such skills come only after breeding the teeth of many dozens of hacksaws.

In the absence of such experience, a special tool comes to the rescue. The most affordable option is a regular flat steel plate. A gap is made in it, into which the hacksaw blade should enter practically without a gap. The wiring process is as follows:

At different tooth heights, sawing wood will not be effective, since teeth of a higher height will wear out more due to a greater load, and teeth of a lower height will not participate at all. The broaches of the canvas will be uneven, twitching. There will also be complaints about the accuracy of sawing and the quality of the surfaces of the cuts. Align the teeth in height before sharpening. The height is checked as follows:

Video: How to Sharpen a Hacksaw at Home

How to sharpen a hacksaw?

To sharpen with minimal loss of time and quality, you need to use such special devices and tools as: 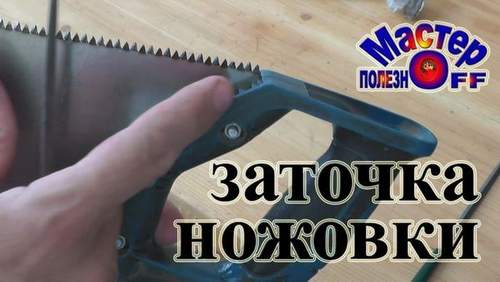 Be sure to use the following files:

When sharpening a hacksaw on a tree, a simple vise is also used, which is quite uncomfortable and long, as well as a multi-axis type vise, since their bed is rotated and fixed at the necessary angles to ensure the movement of the tool strictly in the horizontal plane. It is recommended to organize additional lighting of the working space with the help of electric lamps. Throughout the entire sharpening time, the file / file must move without jerking, it is necessary to ensure constant pressure, movements must be made without deviations from a constant angle. The process of sharpening is only the movement of the file "on my own." The file / file must be returned by air, while there should be no contact with the hacksaw.

Hacksaws are used for various purposes. The wood is sawed along or across the fiber. Accordingly, the teeth will also be different.

Sharpening the teeth of a cross-cut saw

When sharpening such teeth, a fine-cut trihedral file is used. The direction of movement of the tool is an angle of 60 degrees. The hacksaw is fixed in the device at an angle of 45-50 degrees to the workbench. The file / file must be driven strictly horizontally (keeping the angle of 60–75 degrees to the hacksaw), starting sharpening from the first left tooth. You need to start with "adjusting the movement of the hand with the tool", for which they are carried out along each left side of the odd row of distant teeth, which will give the necessary movements to the movements of the hands. After that, the same thing is repeated, grinding the right edges of the odd teeth to complete the sharpening of the cutting edge and sharpening the vertices. Having finished sharpening the teeth of the odd row, the hacksaw is turned over in the fixture and the same steps are repeated for the even row, which is a distant row in this position.

The teeth of the hacksaws for longitudinal sawing have an angle of less than 60 degrees, so they use files with large notches or a small file with a rhombic section. Trihedral files in this case are categorically not recommended. For sharpening, the hacksaw is vertically fixed in the device. There are two methods to sharpen a hacksaw, which are distinguished by giving different sharpening angles.

If necessary, restore the sharpness of the teeth using large-sized notch files or small-handed diamond-shaped files. For hacksaws of mixed type, there are the same two options as for longitudinal and transverse hacksaws. They are distinguished by slightly different sharpening angles (90 and 74–81 degrees, respectively).

It is worth paying attention to the table of correspondence of inches to millimeters.