All Stihl chainsaws have two-stroke engines, the cold start of which has a similar algorithm. But there are models on which additional equipment is installed that allows you to start a saw without excessive effort. For this reason, the algorithm for their launch may be slightly different. 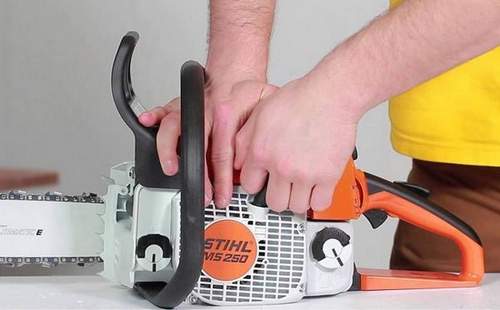 Let’s look at how to start a conventional saw and how the process differs from launching a modified model.

The Stihl MS 180 chainsaw as standard is not equipped with any additional devices that can facilitate startup.

Below you can see how to get Stihl 180. The video reflects in detail all the main points, and the author’s comments allow us to understand the whole process to the smallest detail.

The device of this model, compared with the previous one, has some differences in the trigger mechanism, but it does not carry any changes to the startup algorithm. The fact is that in the Stihl 180 C the ErgoStart system is installed, which, due to the additional spring installed in the starter of the chainsaw, reduces the resistance of the engine at start-up.

The fuel supply system in the Stihl MS 211 C-BE chainsaw is additionally equipped with a manual fuel pump, which makes it easier to start the chainsaw in the cold.

The instructions for starting this Stihl chainsaw model contain one additional point, which is that before starting the chainsaw in the cold, it is necessary to pump fuel into the carburetor using a pump. Further, the instruction is no different from starting Stihl 180 and follows the same algorithm.

Video: How to Start a Stihl Ms 180 Chainsaw

What happens when the primer is pumping fuel, and how does it help to get a saw more efficiently?

At the time of starting the saw without a primer, several strokes of the starter are carried out only so that the fuel pump pumps fuel into the carburetor under the influence of a pulse from the crankcase.

A pump installed in the fuel line allows manual pumping of gasoline into the carburetor without unnecessary movements by the starter. The effect of this action is obvious, the saw starts up much faster.

Many petrol tool owners mistakenly believe that using a hand pump can unnecessarily pump fuel into the carburetor and for this reason it will flood the candle. This is fundamentally wrong, because the system is able to circulate in a circular fashion. Excess gas from the carburetor will be directed, through a special hose designed for this, back to the tank.

There is no need to use a primer on a hot chainsaw, because the fuel in the carburetor is enough to start.

After the first flash has passed, the valve will return to normal operation; accordingly, after the engine control lever is in the open air damper position and the start continues, the decompression valve must be pressed again.

Schematically, the operation of the valve is shown in the figure below.

In fact, the valve does not start faster, it just simplifies the process and makes it more comfortable, because for during start-up a person will have to apply much less effort.

A saw with a decompression valve, whether it is a cold engine or a hot one, must be started using a valve to facilitate cranking. This will significantly increase the service life of the starter and reduce the number of dangling laces, because it is installed on chainsaws with a large cylinder volume and, accordingly, compression.

How to start a saw after a long downtime

The fact is that a successful start after downtime must be taken care of in advance and properly prepared for storage. According to the manufacturer’s instructions, before storing it is necessary to drain the fuel from the tank, then start the engine and burn the fuel in the fuel system.

Preparation is necessary so that during storage, the carburetor membranes do not stick together. Performing this simple operation will allow you to successfully start the saw after prolonged storage.

It is much easier to start a chainsaw six months after downtime, if immediately before starting, through the spark plug hole, add 1-2 ml of the fuel mixture to the cylinder. This can be done with a syringe.

Starting a Stihl chainsaw almost always follows the same algorithm, except in cases where a decompression valve and a fuel primer are additionally installed on the chainsaw. These devices are designed to facilitate the startup process and do an excellent job with their functions.