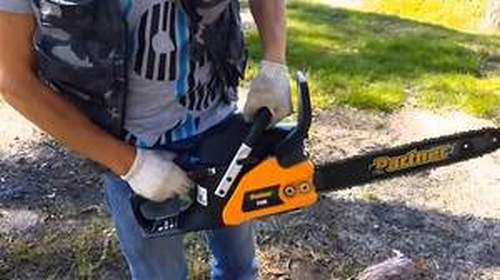 Almost every summer resident or villager has a chainsaw in his arsenal, the partner model 350 is especially popular. However, sometimes this tool fails. If you encounter such a problem, then do not despair, because its mechanism is so simple that you can even do the repair yourself. The article discusses the main causes of breakdowns and their elimination.

Characteristics of the chainsaw Partner 350

This model is in considerable demand among consumers, but most often it is bought by summer residents to work on their sites. They use a saw not only for harvesting firewood, but also in construction.

In general, Partner 350 chainsaws are distinguished by their compact size. They are equipped with a fairly powerful engine. Their main advantages are easy start-up and reliable operation, performed by a quality electronic ignition system and fuel pump.

Using such a chainsaw is completely safe. It has a security system built in that automatically executes inertia brake for the chain. In the same mode, its lubrication is also carried out.

With the launch of the chainsaw, the Partner will not have problems even in the winter, since it has fuel primer. The starter drum is equipped with an impeller that helps cleanse itself of dirt. In addition, manufacturers supplied the tool with CCS. This design retains residual particles, and is also used for long-term use of an air filter.

Developers to increase the life of the chainsaw on the cylinder of the piston group made chrome wall. This model also has an ergonomic handle and anti-vibration system.

What kind of breakdown may occur

Chainsaw malfunctions can be divided into groups:

Chainsaw engine breakdown is more common than others. Most of the time is spent on its detection and repair. As a rule, it comes down to such manifestations when the engine is unstable or completely stalls, the engine does not start, does not develop power.

Before you start repairing the chainsaw, first check all the possible causes of violations in its functioning, and even better watch the video. Fortunately today on the Internet you can find any material of interest.

Then you have to prepare the necessary tools for repairing breakdowns:

When the engine refuses to work, but there’s a spark on the candle, and the fuel comes in, ignition should be checked.

It is not difficult to check it at all: unscrew the candle, and between the contacts adjust the gap, connect it to the wire and press it to the cylinder body. After that, watch for when a spark appears.

If any deviations occur, you must perform ignition system tuning. In general, this process is similar to adjusting the ignition in other two-stroke engines.

To establish a similar malfunction of the chainsaw will turn out when inspecting the candles. Fuel may not enter the cylinder for various reasons:

In the event that there is no correct ratio between the gasoline and the air mixed in the carburetor or the fuel is not supplied enough, check whether the channels and the carburetor air filter are clogged. In addition, you may need to adjust it.

The filter is carefully removed before cleaning and washed with detergent, after which it is left to dry. Then it is put in place.

Read more:  How to Change a Clutch Spring On a Chainsaw

Carb adjustment It is carried out, as a rule, by screws. of the maximum and minimum turns. When carrying out it, you must strictly follow the instructions for repairing the chainsaw, otherwise you can ruin the motor. Sometimes manufacturers leave only one adjustment screw to prevent the inexperienced craftsmen from interfering with the carburetor.

If debugging doesn’t fix anything, then you should cleaning channels and filter mesh, and also check the integrity of the membrane.

Do not forget that the carburetor is one of the complex mechanisms of the chainsaw, so you need to approach it responsibly with cleaning and disassembling.

It consists of many small elements that can quietly jump out and find them will be difficult. Often after disassembling this device, some users cannot assemble it.

What to do if a muffler is clogged

If the chainsaw engine functions normally at low speeds, but at high smoke and stalls, then the reason is most likely in the muffler. Disassemble it first, but remember to close the outlet.

Then disassemble and clear of soot dry or with detergents, blow dry, assemble and install.

Do not dry clean without special protective equipment, as carcinogens in tan are released as dust. Inhaling it is very dangerous. When operating a chainsaw, it is necessary to monitor the quality of the fuel mixture.

Necessary regularly lubricate the chain in the process of the saw, because it works in extremely difficult conditions. Its service life is adversely affected by abrasive particles, dust and even overheating.

If you leave the chain in a dry state, then soon it will happen stretching and overheating. In the worst case, jamming may occur, that is, a sprocket failure. Oil is fed through it through channels that are often clogged with sawdust. They must also be cleaned regularly.

Other than that, constantly clean under the chainsaw cover from debris and sawdust, because the chain brake may not work because of this. In addition, contamination has a bad effect on the performance of the device.

Failure of the cylinder-piston group

The most serious malfunctions are considered to be scratches on the surface of the piston and cylinder, their damage, dropping of the piston rings in the grooves, breakdown of the crankshaft bearings.

Most of them lead to the inability to start the engine, as pressure drops in the cylinder. There are several options for repairing and checking the condition of the cylinder-piston group (CPG).

For example, you can measure compression in the engine. For this operation, a compressometer is used, which is mounted in the candle hole. Thus, it is possible to check the condition of the parts of the CPG.

To see the side of the cylinder, silencer must be removed and look into the gap that has opened. Although the review is limited, the general status of the CPG can be seen.

For an accurate assessment of the performance of the cylinder-piston group completely disassemble the engine chainsaws. First, the crankcase is disconnected from the cylinder, after which the piston is pulled out. If it has chips, badass and big scratches, then it must be changed.

Low compression occurs most often during coking and damage to the piston ring. Be sure to check that there is no soot on it. In addition, it should sit freely in the piston groove and be pressed against the surface of the cylinder.

In general, you always need to keep the chainsaw clean and different holes. This is the only way to avoid many breakdowns and further repairs. Be sure to watch the video on how to do it right.