One of the important chainsaw systems, work without which is impossible, is the system of forced lubrication of the chainsaw chains. It’s no secret that at the time of the saw’s operation, the chain abrases on the chainsaw tire, which causes it to heat up and premature wear. To mitigate friction, the chain mechanism must be constantly lubricated. 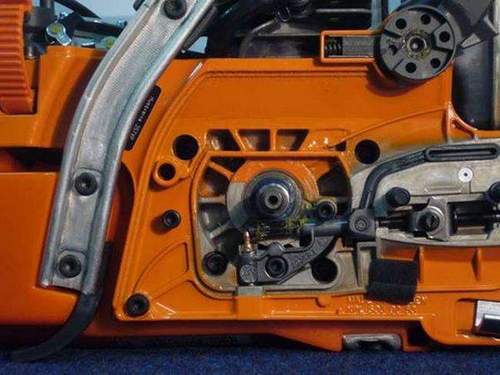 To supply oil to lubricate the chainsaw chains, a special pump is used in the tool, which is dosed, depending on the number of engine revolutions, supplies lubricant to the saw bar.

The system uses oil to lubricate the chainsaw chain, which has improved adhesion properties, this is necessary for uniform distribution of oil around the entire perimeter of the tire and hold on it even at high speeds of chain rotation. Let us consider in more detail the oil supply system implemented in modern chainsaws.

Depending on the brand of the chainsaw, the details of the lubrication system may vary slightly constructively, but their total number and connection diagram remains unchanged.

The main components of a lubrication system are:

The main unit of the system is the pump. The principle of his work is as follows. With an increase in engine speed, a gear mounted on the main shaft drives the pump shaft through a worm gear. In turn, the rotation of the shaft creates a certain pressure in the oil line, which causes the oil to move along it towards the tire.

Grooving is necessary to ensure that oil is supplied to the tire, regardless of the degree of chain tension of the chainsaw. Simply put, no matter what position the tire is at the time of operation, oil will flow through the groove through it.

Further, a chain is included in the lubrication process, on the links of which, depending on the model of the chain, there is either a groove or a hole through which the oil is dispersed throughout the tire. With an increase in engine speed, the oil feed rate also increases.

Some chainsaw models are equipped with pumps that additionally have a capacity control, and if necessary, the amount of oil supplied by the lubrication system can be increased or decreased.

This function is quite convenient, because it allows you to save and not to waste extra oil.

Lubrication system malfunctions and how they are eliminated

The main malfunctions of the oil supply system on a chainsaw can be divided into two main types, these are general malfunctions inherent in all chainsaws and individual ones, which can vary depending on the type of pump and worm gear installed on a particular model. Let’s start sorting out the faults in order.

Working with a chainsaw if the chain is not lubricated is prohibited. This adversely affects the tire, the drive sprocket and the chain, and can also result in serious repair costs.

Signs of a malfunction of the lubrication system, checking its performance

Read more:  The proportion of oil and gasoline for the Stihl chainsaw

All these signs indicate that the lubrication process is abnormal. In order to check the oil supply by the lubrication system, it is necessary to remove the side tire of the chainsaw and start it. Next, you need to slightly increase the speed while observing the end of the oil line. If oil comes in, most likely its quantity is not enough for normal lubrication and you need to clean or replace the filter and, if possible, adjust the flow. In the case when it does not arrive, the problem is more serious and requires further diagnosis.

There is a way to check the oil supply without removing the tire. To do this, it is necessary to direct the end of the tire to the side, for example, of freshly sawn chocks from the cut side and maximize the speed, while you should try to keep the end of the tire at a distance of no more than 10 cm from the chocks. If oily stains begin to appear on its surface. then the oil is supplied.

Once it has been determined that no oil is being supplied, further diagnostics are only possible if the oil system is completely removed. Of course, filter replacement helps in some situations, but this is very rare.

Access to the oil pump of some models of saws is possible only after complete disassembly, respectively, having no skills in repairing gas tools, it is better to entrust the repair to professionals.

Read more:  How to mix gasoline with chainsaw oil

Due to the fact that the Stihl MS 180 is one of the most common chainsaw models, I would like to dwell on one malfunction inherent only to it and describe a method for eliminating it without replacing parts.

Quite often on a Stihl MS 180 chainsaw, there is a depressurization of the oil line in the place where the oil pipe coming from the tank is installed in the saw body. The malfunction can be determined by the characteristic smudges on the bottom of the tool.

To eliminate the malfunction, it is necessary to remove the chainsaw handle, remove the hose from the bore hole, clean and degrease it. After all these manipulations, apply sealant to the hose seat and install in the chainsaw body.

You can learn more about troubleshooting and a complete diagnosis of the Stihl chainsaw lubrication system by watching the video, which shows step by step the process of disassembling and repairing the lubrication system.

In modern chainsaws, a reliable supply of lubricant for the chain is organized, in case of malfunctions of which, it is not worth operating the chainsaw in order to avoid further breakdowns. It is better to troubleshoot the lubrication system by contacting a service center or a specialist with repair experience, this ensures the quality of the final result.