The Stihl MS 180 chainsaw is considered one of the most reliable among the models of its segment. But the technique is the technique, and sometimes malfunctions arise, the elimination of which may require the repair of stihl ms 180. 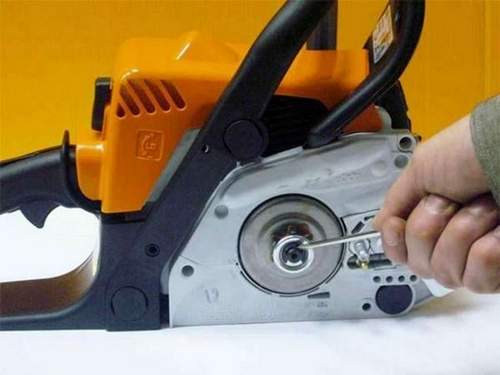 This is the very first question that arises before the owner of the Stihl 180 chainsaw, which for some reason has ceased to function normally. To answer which definitely will not work. It will be correct to say: it is possible, but is it necessary? Repairing a chainsaw in a service center is of course more expensive than trying to fix the problem with your own hands, but using the services of specialists, you get guarantees and confidence that the chainsaw will be properly configured and adjusted. In general, the choice is yours.

Another small nuance regarding the choice to repair on their own or not, is that for the diagnosis of the chainsaw and its further disassembly and repair, it is necessary to have some specific tools and certain knowledge of the design of the saw. Otherwise, you cannot even unscrew and remove the flywheel without damaging it.

Carrying out independent repair of the saw, aluminum fan blades located on the flywheel are often broken off. This is because when disassembling, they do not use a special crankshaft stopper, but try to fix it by installing a screwdriver between the saw body and the flywheel blades, which leads to sad consequences. The flywheel nut has a serious tightening torque, and the blades are brittle and unable to withstand such a force.

To carry out a relatively high-quality repair of the Stihl ms 180 chainsaw yourself, you will need to have:

Only with these tools, repairing a Stihl 180 chainsaw with your own hands can be performed quite qualitatively.

Common malfunctions on a Stihl chainsaw include:

Now we will consider the malfunctions in more detail and begin with the repair of the oil pump.

If there is no oil supply to lubricate the circuit, it is necessary to diagnose the entire system and determine the reason why the oil is not supplied. The main reasons may be several:

To check the thread on the worm drive of the oil pump, you will need to remove the drive sprocket of the chainsaw and untwist the clutch. To do this, the spark plug is screwed out and a piston stop is installed in its place, thereby ensuring reliable fixation of the crankshaft of the tool from turning.

Next, the cover is removed from the side of the Stihl 180 chainsaw tire, and with the help of a screwdriver, the retaining ring holding the drive sprocket is removed, after which the sprocket itself is removed.

In this way, the Stihl 180 chainsaw sprocket is also replaced if necessary.

The clutch is untwisted by means of a head on 19 and a winch. It is necessary to untwist the clutch in a clockwise direction, since the thread is left. A reflective plate is installed behind the clutch, it must also be removed. The next part is the worm gear of the oil pump. Having examined and discovered the absence of plastic thread, you can safely throw out the part and install a new one instead, since its restoration is impossible. The Stihl 180 chainsaw is assembled in the reverse order.

If the gear is in normal condition, the disassembly of the saw continues, for this, the corkscrew is removed, the rear handle is untwisted and the throttle control rod is disconnected, after which the handle block is removed from the shock absorbers using a powerful slotted screwdriver.

Remove the handles to provide access to the bottom at the installation site of the oil pump.

In the next step, the oil hose coming from the oil tank is removed from the seat on the housing and the line is checked for blockage by supplying air through the oil hose to the oil tank housing. If a blockage is found, it must be cleaned, if it is impossible to do this, the defective hose must be replaced.

Typically, Stihl oil pumps rarely become unusable and require replacement. Basically, the reason for the lack of oil supply in the blockage, so rinsing and checking the pump gear for cranking, you can be sure that after reassembling the Stihl 180 chainsaw, the problems with oil supply will disappear.

After repair, we assemble the Stihl 180 chainsaw in the reverse order. An important point is the sealing of the oil hose at the installation site, in the seat on the housing. It is necessary to rinse the hose and the hole for its installation with gasoline, then blow it with compressed air until it dries completely and coat it with oil-tight sealant, and then reinstall it.

A frequent breakdown of the Stihl chainsaw, which happens due to the fault of the operator, is a malfunction in the engine control mechanism. precisely, when the seat for the control lever breaks off due to its design features, to solve this problem, it will be necessary to replace the saw body, which is difficult to do on your own. Consider the do-it-yourself repair algorithm, according to which the replacement of the chainsaw body takes place:

To carry it out qualitatively, it is necessary to clean and degrease the pallet and its installation location on the saw cylinder, and then grease it with sealant and install the pallet by tightening it crosswise to the required force.

At the time of installation of the pallet, it is important not to confuse the location and set so that the cast to hold the oil pump housing is located in the opposite direction from the flywheel, otherwise it will be impossible to put the engine back into the saw body.

The assembly of the chainsaw after repair is carried out in the reverse order.

How to replace the starter cord

Quite often, the starter cord needs to be replaced due to a break. Let’s see how it can be replaced without contacting a service center.

To remove the starter from the Stihl 180 chainsaw is quite simple, even without removing the handle block, for this you will need to unscrew the fastening screws and remove the covers of the oil and fuel tanks. After which, slightly raising and deploying the starter, remove it from the seat.

The starter cord is wound on a special drum, which is installed in the body of the part. To replace the cord, there is no need to remove the drum, just remove the tattered cord and rewind a new one.

Use an original Stihl cord with a suitable cross-sectional diameter to replace. If the cord is thicker, the number of turns of the cord wound on the drum will decrease, which will lead to a decrease in the stroke of the starter.

After the cord is wound on the drum, it is necessary to pass through the starter housing and installing the handle to fix it using several knots made one after another. Next, the working stroke of the starter is checked, and if everything is in order, the part is installed in place.

A video that shows how to replace the starter cord yourself can be seen below. The wizard comments in detail all the stages of replacement, starting with the removal of the starter and ending with the installation.

Starter malfunctions and their elimination

What other malfunctions happen to the starter? One of them is the failure of the return spring, the restoration of which is impossible and the part will need to be replaced.

It is recommended to do this in the service center, as the process is quite complex and requires some practice.

The Stihl MS 180 chainsaw has an electronic ignition system, the adjustment of which is to set the gap between the flywheel and the ignition coil of the Stihl 180 saw. To adjust, remove the starter, loosen the two screws that secure the ignition coil and place a strip cut out of the plastic bottle between the flywheel and the contacts of the coil. tighten the fastening screws.

To check the clearance, it is necessary to turn the flywheel and check whether the coil contacts touch it.

Stihl MS 180 is a fairly reliable saw, but if it is used improperly, using poor-quality lubricants or due to negligence of the operator, malfunctions can occur. To repair the saw with your own hands, you must have certain knowledge and a special tool, in the absence of which repair is impossible. Do not forget that the Stihl 180 chainsaw is a technically complex tool and its maintenance is best done in a service center.