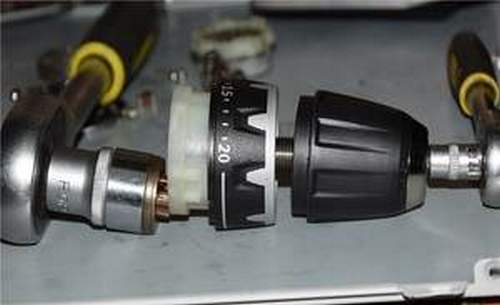 A screwdriver is an effective tool that allows you to speed up the implementation of many construction, locksmith and assembly works. He successfully replaces not only a large assortment of screwdrivers and wrenches, but can also act as a drill. However, any equipment is subject to wear. Damage to various components may occur. Often there is a need to replace the cartridge on a screwdriver. To successfully carry out repairs, it is worthwhile to study the device structure in more detail.

All screwdrivers have approximately the same device. Individual varieties may include a number of additional nodes. But any model is equipped with the following required elements:

The most common malfunction is a dead battery. The easiest way to replace a dead battery with a new one. If the model is old and the necessary batteries are not on sale, you can try to adapt the filling from another by placing it in the housing from the old one. Care should be taken to ensure that the electrical characteristics of the batteries used are replaceable.

Nickel-cadmium batteries have a memory effect. Sometimes, to restore their normal operation, it is enough to conduct several cycles of full discharge and charge. This will return the battery to its original capacity.

Repair of most of the internal components of the tool requires high qualifications and significant labor costs. The external unit, which is relatively easy to replace in the event of a malfunction, is a cartridge.

Most screwdriver models use three-jaw chucks. The chuck accounts for the bulk of the load when the tool is running. This can lead to frequent malfunctions. The most common problems are:

To carry out repairs, it is necessary to find out the cause of the breakdown. To do this, first remove the cartridge. Before doing this, you should find out the method of attachment. Two options are possible:

As an additional locking fastening that protects against accidental detachment of the cartridge during operation, a screw is often used that is screwed from the side of the cartridge into the shaft.

To determine the type of attachment, carefully study the markings. Usually, the fixing method is indicated directly behind the shank diameters:

After determining the type of fastening, you can proceed to remove the cartridge. The fixing method determines the dismantling procedure. It is useful to consider both of these options.

It is easy to remove the cartridge from Bosch, Hitachi, Metabo, Makita and other popular brands screwdrivers, because in most cases they have a threaded fastener. For this It is recommended to use the following algorithm:

Video: Replacing the Chuck On a Bosch Screwdriver

These operations are recommended when the battery is fully charged. This will provide sufficient torque and impact impulse.

In advanced cases, when such manipulations do not lead to success, it will be necessary to disassemble the housing and remove the shaft along with the cartridge. For dismantling, the shaft is tightly clamped in a vice, and the cartridge is unscrewed using a key and a lever, which can be used as a pipe segment.

expensive products can have special grooves on the shaft, which instead of a vice, fix the shaft with a wrench. Unfortunately, this is less and less common in modern models, as manufacturers pay less attention to repair options and are advised to purchase a new tool in case of breakdowns.

It is strongly recommended that the threads be pretreated with an anti-corrosion agent such as WD-40, instead of which white spirit, gasoline or kerosene can be used. This will facilitate loosening.

The cartridge can only be removed with a chilled tool. If the appliance heats up during operation, there is a chance of thread expansion. This will complicate or make it impossible to unscrew.

The question of how to unscrew the chuck on a screwdriver is relevant only for screw fastening. The removal method in the case of conical fixation is fundamentally different. The application of shock loads to the cartridge itself will be required, but the plastic case will not withstand this, therefore, conical fastening in screwdrivers is used extremely rarely.

If you had to deal with conical fixation, you can use the following methods:

If the cartridge mounted on the cone has a fixing screw that is screwed in from the cams, it can help in disassembling. Do not completely unscrew the screw.. Turning it a few turns, you can try to knock on the head. This will require a piece of metal bar and a hammer. If there is an impact screwdriver, the task becomes even easier, since blows can be applied directly to the handle.

Before deciding to buy a new unit to replace a broken one, you may need to check for repair. To do this, you will have to disassemble the chuck of a screwdriver. The design is based on an internal conical shaft. There are guides for cams on it. The outer surface of the cams has a threaded thread corresponding to the internal thread of the cylindrical cage. When the cage rotates, the cams move along the guides, and their clamping part converges or diverges to the sides depending on the direction of rotation.

The clip is protected from axial movement by a locking screw or a special nut. To disassemble the cartridge, unscrew the screw or top nut. The indicated nut is most easily turned off with a gas wrench when the housing is clamped in a vice.

The situation is complicated when the clip is jammed. In this case, it cannot be removed even after the locking element has been removed. To fix the problem, it is advisable to withstand the cartridge for some time in a solvent, then clamp it in a vice and try to remove it with considerable effort. If such manipulations do not lead to success, it is better to replace the cartridge with a new one.

Read more:  Conversion Of A Screwdriver To Lithium 18 Volts

In some cases, disassembly is not possible. Often this is done in order to force the owner to acquire a new cartridge. In an extreme situation, you can sometimes solve this problem. To disassemble, you need to saw the clip.

If everything is done carefully, after repair or cleaning, the elements of the clip can be tried to be connected with a collar or other home-made fixing device. However important to remember, that this method is only suitable for temporary repairs. In order to ensure the safe operation of the tool, it is necessary at the first opportunity to replace the cartridge restored in this way with a new one.

Most often, cartridge malfunctions occur due to damage to the most vulnerable elements: thread on the clip and reciprocal cutting on the cams. If the damaged areas are small, the defects can be removed with a needle file. After work, the surfaces must be cleaned with a fine sandpaper.

In the vast majority of cases, the threaded elements inside the cartridge are made with large geometric tolerances, so the grinding of individual threads and even the complete removal of some of its sections often does not affect the functioning of the clamping mechanism. Sometimes the accuracy of the centering of the clamped tool may be slightly affected due to the occurrence of backlash when moving or skewing the cam. This can adversely affect the use of a screwdriver as a drill, but usually does not interfere with tightening screws and self-tapping screws.

If the malfunction is caused by excessive backlash or misalignment of the cam, it cannot be eliminated. In this case, only replacing the damaged item with a new one can help. Sometimes a malfunction can be caused by a simple hit of chips inside the housing. In this case, it is enough to remove metal particles and metal dust, and then rinse all parts in any solvent or kerosene. Assembly is carried out in the reverse order without significant effort.

If the damage is significant and can not be repaired, you will have to buy a new cartridge. It is recommended not to throw away the damaged unit, since in the future its components may be required as spare parts. Sometimes a broken cam can be replaced by a similar one, even if removed from a cartridge from another manufacturer.

It is difficult to overestimate the benefits of having a screwdriver in any household. It greatly facilitates the implementation of many repairs. Some device malfunctions may require the intervention of a qualified technician to carry out repairs. However, you can replace the batteries or the cartridge yourself. In most cases, it is not difficult to replace a broken cartridge with a new one. When working, you should strictly adhere to the instructions corresponding to the method of fastening the unit.