The Stihl 180 chainsaw (aka Stihl MS 180) is the most popular and recognizable model of the German brand. This chainsaw is simple and reliable. The only unit that requires close attention is a carburetor. This article will discuss the carburetor adjustment, its repair and maintenance.

What carburetor is used on a Stihl 180 chainsaw

The Stihl 180 chainsaw has a Japanese Zama carburetor of membrane type. Some users are confused by the inscription China on the carburetor. Yes, indeed they are going to China. But the plant is owned by Stihl (Stihl), and quality is still high. However, the chainsaw also has Chinese counterparts with corresponding carburetors. But such saws are usually cheaper than the original. 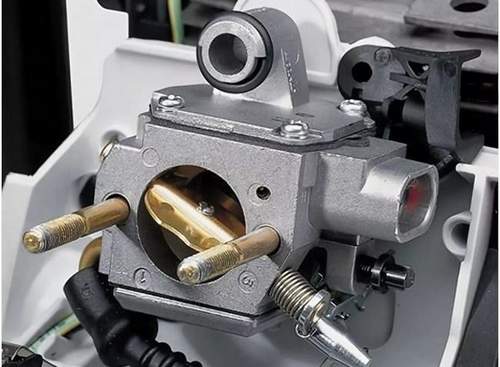 How the Stihl 180 carburetor works: device, principle of operation

The main components of the Stihl 180 chainsaw carburetor are the following components:

The principle of operation is as follows. The chainsaw crankcase is connected to the fuel pump in the carburetor by a special channel. Due to the alternating stroke of the piston, a vacuum is created in the engine crankcase. As a result, the diaphragm rises in the fuel pump and the valve for supplying fuel to the carburetor opens.

Further, the fuel passes through a filter element (mesh) and through a special channel enters the main chamber. A control membrane is installed in this chamber, which regulates the fuel supply by pressing the rocker arm, which in turn lowers the needle valve.

For raising the control membrane is responsible for the vacuum that occurs in the carburetor diffuser due to the rotation of the air, throttle valves. Once the engine has started, the mixture needs to be leaner. We lower the air damper, the vacuum in the diffuser is minimal, the membrane falls into place.

Usually, special screws are responsible for the quantity and quality of fuel entering the diffuser, by adjusting which we change the cross section of the fuel channel. But on the used carburetor of the Stihl 180 chainsaw, to facilitate the operation of the saw, these two screws are missing.

The channels are designed so that the optimum amount of fuel gets into the diffuser at all engine speeds. And for the adjustment here, the LD screw is responsible, the rotation of which regulates the air supply to the idle jet. Due to which there is a change in engine speed.

So, to adjust the carburetor of the Stihl 180 chainsaw, you will need an ordinary flat screwdriver and an electronic tachometer (not necessary). The adjustment algorithm is as follows:

If after all the manipulations with the carburetor settings, the chain continues to spin at idle, you need to give the saw to the dealer at the service center.

The video below provides a detailed adjustment of the carburetor of the Stihl 180 chainsaw using an electronic tachometer.

The main malfunctions of the carburetor of the Stihl 180 chainsaw include the following.

A common problem due to which the Stihl 180 is unstable is the loss of the retaining ring on the axis of the throttle, as a result, it begins to dangle and play, which in turn leads to interruptions in work.

So, you decided to remove the carburetor and carry out diagnostics. The removal procedure is as follows:

A more detailed and intuitive algorithm for removing the carburetor from a chainsaw is presented in the video.

As for the disassembly of the carburetor chainsaw Stihl 180, then everything is simple. 1 bolt is unscrewed on the cover of the fuel pump and 4 bolts on the cover of the main chamber. This is enough to change all the necessary components from the repair kit.

After disassembling, the carburetor must be rinsed in gasoline, and the channels and jets must be blown with compressed air. In no case should you blow out the carburetor under high pressure and in the assembled state. Otherwise, you may stretch the membrane or diaphragm. The carburetor will stop working properly.

In order to assess the state of the filter mesh and membrane, you need to perform the following sequence of actions:

As for the Stihl 180 carburetor repair kit, it includes a set of gaskets for covers, a diaphragm and a membrane, a needle valve, a rocker with an axle and a spring. The price of such a kit is from 100 to 400 rubles.

Zama carburetors are very reliable and easy to operate. Specifically, a carburetor is installed on the Stihl 180 chainsaw, on which there are no screws to adjust the quality and quantity of the mixture, as we are used to. One screw greatly simplifies the adjustment.

The membrane carburetor has no significant drawbacks. With such a carburetor, the chainsaw works in any position. With side cut, vertical, etc.

Despite the above advantages, the carburetor is sensitive to fuel quality. In addition to clean air from the air filter, it is required to supply purified fuel from the gas tank to the carburetor. But this is not always possible, therefore, at least once every six months it must be cleaned and purged.

How much is a new carburetor

Stihl 180 chainsaws are in great demand, primarily due to their reliability. The carburetor was no exception and also quite reliable and unpretentious. Adjustment or repair of the carburetor is required only after prolonged use, at least 5-7 years later (with an average load). The setup process itself is maximally simplified by Stihl engineers, this is the first chainsaw in which only one screw is provided for adjustment.

The need for the operation “Adjusting the carburetor of the chainsaw” is determined by the color of the electrodes of the spark plug: if black. means over-enrichment, if brick-gray. means normal, if snow-white coating on the electrodes of the candle. means lean mixture.
The main role in adjusting the carburetor of the Stihl chainsaw is played by the upper screw (closest to the muffler). According to the factory characteristics (indicated on the lid of the chainsaw), it must be unscrewed by 1 revolution, and then you need to adjust it. if you unscrew it, the working mixture is enriched (it gets into the air-fuel mixture than just gasoline), if you screw such a screw, the working mixture becomes leaner (less gasoline gets into the air-fuel mixture).

1. Screw the screws “H” and “L” (on the muffled chainsaw) in full, and then unscrew both by 1 revolution.
3.2. Start a chainsaw and warm it up. Give full throttle and reach with the “H” screw so that the maximum engine speed is 14,000 rpm. by tachometer (by engine speed counter). The highest revolutions for adjustment to keep no more than 10 seconds!
3. To reach the idle stop bolt “LA”, so that the chain starts to move, and at the end turn the myth bolt на turn counterclockwise.

4. If, after this adjustment of the carburetor of the chainsaw, the idle speed is not stable, and the chainsaw does not accelerate well, then you need to turn the “L” screw a little counterclockwise until the chainsaw starts to rapidly gain speed and work perfectly at idle. After that, adjust the bolt “LA” (idle on the tachometer must be 2800 rpm).

Chainsaw Carb Adjustment Stihl is required when changing the properties of fuel, altitude, a busy Stihl chainsaw (vacuum), as well as when changing atmospheric pressure, temperature and humidity. Setting the carburetor of the chainsaw allows you to achieve a good performance of the chainsaw with the deterioration of the external operating criteria. Also, adjusting the carburetor of the chainsaw helps prevent oil starvation and engine damage due to insufficient lubrication entering the cylinder with a lean fuel consistency.

Tip: To check the density of the motor, it is great to use a special device, i.e. special pump with pressure gauge. First, you need to remove the carburetor on the chainsaw, and install a sealed plate plug with a flange on the inlet window of the cylinder to connect the hose to the pump. Spark plug for density, too, of course put on a sealant. You also need to remove the muffler, and install a sealed plate with a rubber gasket on the exhaust window of the cylinder. Then you need to put the piston at top dead center and connect the hose from the pump to the flange. Next, you need to pump air into the engine up to 0.9 atm. and look at the gauge needle. if it is in the workplace, it means the piston motor is tight. Then we release air, switch the device (pump) and start pumping air out of the cylinder, creating a vacuum in the engine with a pressure gauge reading of 0.5 atm. We look at the pressure gauge needle. if it is in the workplace, it means there are no air leaks in the engine through gaskets or other seals (which aggravates the operation of the chainsaw and does not even make it possible to correctly adjust the chainsaw carburetor). In this way, we check the engine for air leaks and compression.

Why it may be necessary to adjust the carburetor even if it seems to start and work? Carb adjustments should be optimal.

In general, the carburetor has a very important effect on the operation of the chainsaw, it is its "brain" indicating how much air and fuel mixture to feed into the cylinder and in what proportion. If the mixture is “rich”, that is, the fuel in it will be more than it should be, then as a result we have a loss of power, deposits on the walls of the cylinder and piston. Which in turn can lead to failure of the chainsaw. In turn, the “poor” mixture, which has more than normal air in its composition, also leads to loss of power, insufficient lubrication of the CPG, scuffing and possible “jamming” of the engine. Optimal settings carburetor chainsaw allows you to get maximum power, extend engine life, provide minimal emissions!

A little more about the "poor" and "rich" mixtures.

A “rich” mixture is a fuel mixture in which the amount of fuel supplied to the carburetor exceeds the norm. In this case, the fuel does not have time to burn out completely and less energy is produced than with the optimal ratio of fuel to air. Partially unprocessed fuel enters the muffler, then chainsaw smokes a lot.

There is an excess of air in the “poor” mixture, which is also not good, as it has its drawbacks. Namely: insufficient energy during a flash (which means loss of power as a result), excessive heating of the cylinder due to insufficient lubrication and high revolutions, which leads to scoring, and not far from the engine "jamming" there.

Most chainsaws have three adjustment screws on the carburetor. In order about each:

How to adjust carburetor Stihl ms 180 what are the revolutions of min and max? And also a similar video about the adjustment on mine.

Find out more on our website: Let’s be friends in the social. networks :.

If you still have questions, write in the comments or better in the VK group.

Remember that the optimal carb adjustment is: