By the way, why are gas trimmers so popular in our country? There are several explanations for this. Firstly, dragging a cable of 30-40 meters is simply stupid. Secondly, with wet grass or in rain, this will only be a potential suicide bomber. Thirdly, when mowing thick and hard grass, the power of electric models may be simply not enough. 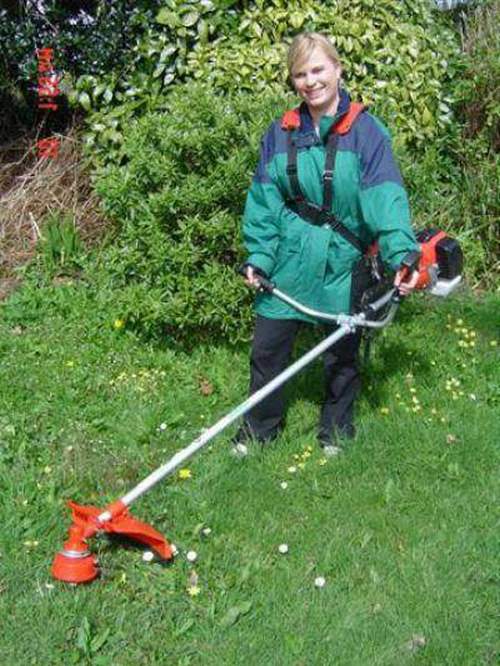 In any case, many buyers confirm that in the event of a breakdown it is much easier to repair just such a device, since this does not require special knowledge in the field of mechanics.

Many believe that the best petrol trimmer is a four-stroke version. The reason is simple: you do not need to use special oil, ordinary gasoline is poured into the tank. The fact is that these models use a separate lubrication system. Reviews indicate that in this case, you can use almost any normal motor oil for cars.

A bit about gasoline

By the way, what kind of fuel should be used, and what is the actual situation? It all depends on the instructions. If it is written that only fuel with an octane rating of “92” should be used, then self-activity is not worth it. Remember that almost every modern engine is designed for a certain type of fuel, so your experiments may not end well: the designers did not lay an eternal resource in the gas trimmer. Instruction here is "our everything"!

Read more:  How to Assemble a Benzotrimmer Video Test Drive

Important! Experienced users of gasoline technology strongly advise against mixing different grades of fuel. Note that in this case, by “grades” we mean not only different octane numbers, but also the origin of gasoline.

So, some gardeners noted that when mixing Lukoil fuel with two-stroke engine oil, an incomprehensible whitish precipitate falls in gasoline. Of course, it is impossible to use such a mixture in any case, since otherwise you will need to buy a new carboturator of a benzotrimmer.

Do not get carried away by storage!

On the open spaces of the network, there is constantly evidence of replacing the piston system after using a long-stored fuel mixture. What is the reason for such a nuisance? It’s simple: as a rule, our gardeners store the finished mixture (gasoline oil) in plastic cans.

Motor oil is a pretty aggressive thing. It has the ability to dissolve plastic and rubber over time. When mixed with fuel, it does not lose its properties. As a result, you do not pour gasoline into your trimmer, but an incomprehensible chemical reagent. The result is predictable: you lose the gas trimmer. Parts are expensive, so it’s best not to do this.

Video: The popularity of gasoline trimmers

The same builders and lumberjacks say that the mixture is best prepared on the basis of one to two days. For the owners of the trimmer, this is especially true: it is unlikely that you will heroically mow a dozen hectares, and therefore buy a better insulin syringe, with which you can accurately measure the oil to prepare a liter and a half fuel mixture that you can actually spend per day.

They cost no more than usual, but the operational characteristics of such consumables are much better. Firstly, gardeners like the fact that the star-shaped fishing line provides an excellent opportunity to mow even thick and old stems of weeds without much difficulty, while the engine does not heat up very much. Much lower is fuel consumption. Thus, in most cases, you will be quite enough fishing line. However, if you want to mow the thick grass in which young trees are found, the knife will still be the best choice.

But our article would not be so interesting if it did not talk about the real experience of operating trimmers from specific manufacturers.

This company was originally American. However, the United States still owns the rights to the brand, but the actual production is located in China. Actually, all the pros and cons of this technique follow from this.

Consumers are impressed by the low cost of trimmers, which rarely exceeds 4-6 thousand rubles. In addition, almost every “collapse” can be found all the necessary consumables, as well as spare parts. Unlike the products of more famous manufacturers, almost half the cost of the trimmer itself will not have to be paid for components.

The reviews indicate that the problems can be fixed independently, as the design of Champion trimmers is quite simple. In addition, the engines perfectly "eat" not too high-quality gasoline, giving out very acceptable power, which is very important in our conditions.

Like any cheap Chinese equipment, the Champion petrol trimmer has many negative aspects. Buyers are often dissatisfied with the overall build quality, which is rarely ideal. This is primarily expressed in the low quality of the plastic used, which is too brittle and tough, which is why the trimmer vibrates and rattles during operation.

Read more:  How Much Oil To Pour Into Gasoline For Trimmer

A huge number of complaints are caused by the quality of the linings on the working handles: again, they are too rough. Ergonomics are low, and therefore with prolonged work can not do without thick gloves. Buttons and other control devices that skillful gardeners prefer to replace with something more thoughtful and reliable cause roughly the same complaints.

A rather large mass is criticized. In combination with strong vibration, this makes Champions unsuitable for their use by the female floor or gardeners of a subtle complexion.

Enthusiastic buyers are revving and compact engine, which is not too demanding on fuel quality. However, consumers nevertheless clarify that it is advisable to use a special two-stroke oil from the manufacturer, since in this case the piston group will last much longer (in the case of two-stroke models).

It is important that only high-quality materials and components are used in the manufacture, and therefore the vibration level of the trimmers of this manufacturer is very low. In addition, the engine noise is much less than in the case of the above manufacturer. Buyers also like the ease of starting a motor: you need to pull the starter a maximum of a couple of times, after which the trimmer can be used.

Disadvantages: increased cost of consumables and spare parts, but in many ways this is the best gas trimmer.