We will continue to consider the parameters of such a tool as a trimmer, which is quite in demand when caring for a landscape gardening site. In a previous publication, a description of the main characteristics was given, as well as the advantages and disadvantages of electric trimmers. Now we turn to the second part of the answer to the question "How to choose a trimmer?". we will discuss features of models gas trimmers. They have more opportunities for mowing vegetation, but are also not without some drawbacks in operation.

Gasoline garden trimmers are often referred to as lawn mowers. Unlike models with an electric motor, such a tool has unlimited mobility. And equipping with a more powerful engine significantly expands the boundaries of the scope of this tool. lawn mowing will allow you to mow not only any grass thickets, but also cut unnecessary shrubs and even young trees.

Structurally, for the optimal choice of the trimmer, it is necessary to determine the characteristics of its constituent parts such as the engine, cutting tool, rod, handle shape and belt equipment. Let us consider in more detail each of them.

But before that, we note that no matter what model of trimmer you choose, do not forget to ask about the availability of a service center and the ability to purchase spare parts.

1. Engine. Most petrol trimmer models are equipped with single-cylinder, air-cooled, two-stroke engines with power ranging from 0.7 hp / 0.5 kW to 4.5 hp / 3.3 kW. For the operation of such an engine, it is necessary to prepare a special fuel mixture, in a certain proportion mixing AI-92 unleaded gasoline and oil for 2-stroke engines (in no case an ordinary engine). The use of AI-95 gasoline will lead to uneven operation and engine overheating.

When preparing the fuel mixture, proper proportionality plays an important role in ensuring reliable and long-term operation of the engine.

So the engine with an insufficient amount of oil will work, although with increased vibration and a distinctive sound of uneven operation. But over time, this will lead to scoring on the surface of the cylinder and piston. As a result, this can lead to the destruction of the piston ring, resulting in jamming of the engine.

An excess of oil causes coking of the piston ring and the appearance of soot on the piston, as well as coking of the muffler screen, which causes a decrease in engine power during operation.

If a long break is planned between periods of use of the trimmer (more than two weeks), it is necessary to drain the fuel. Otherwise, elements of the carburetor will have oxidation and the appearance of tarry deposits.

It is recommended to produce the fuel mixture to the end even at the end of each working day, because during the night the gas from the engine will evaporate and a thin film of oil will remain. This can lead to clogging of the carburetor jets and problems when starting the engine.

Also, various manufacturers are constantly expanding the range of trimmers with 4-stroke single-cylinder engines. They do not require a fuel mixture to operate: gasoline (AI-92 or AI-95) is poured into the gas tank, and oil for 4-stroke engines is poured into a special crankcase. 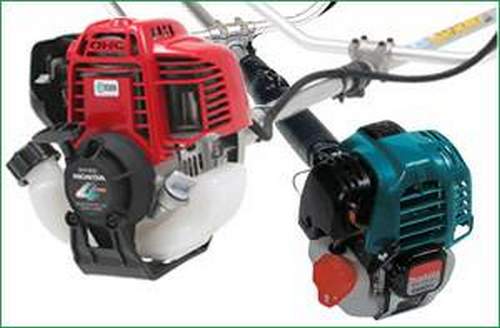 The oil supply for crankcase lubrication in classic 4-stroke engines imposes a restriction on the angle of inclination, beyond which oil can fill the cylinder. Since this creates inconvenience for working with a trimmer, leading engine manufacturers have developed special units with a free orientation in space.

For such engines, a special lubrication system is organized so that during operation the friction surfaces are in oil mist. 4-stroke engines of this type include, for example, the Honda M4 series (GX25 and GX35), Makita MM4 or Briggs&Stratton 021032-0130.

But 2-stroke engines have their advantages. They are lighter and smaller. Their production is simpler, which leads to a significantly lower cost of gasoline trimmer.

Trimmer manufacturers quite rarely engage in the development and assembly of engines for their tools. They prefer to buy them from third-party well-known and reliable engine manufacturers. The reality today is that the latter increasingly open their factories in China: Briggs&Stratton in the city of Chongqing, MTD. in the city of Suzhou. Also, part of its engines at the Chinese plant is assembled by Robin Subaru Power Products, and Mitsubishi generally allowed the Chinese to produce their engines under license. Only China has not officially announced production in China yet.

It should also be noted that manufacturers of gas trimmers do not produce fuels and lubricants. They buy oil in large quantities from third-party companies. Then it is packaged, labeled with its own logo and is actively recommended to be used to work with their tool. Therefore, you can buy oil for a 2- or 4-stroke engine from any manufacturer, adhering only to API classification (JASO).

Read more:  How To Unscrew A Patriot Trimmer Head

During prolonged operation with a gas trimmer, it is necessary to periodically take breaks and allow the engine to cool. In household models, this is usually about 20 minutes of non-stop work and 20 minutes of rest. In professional trimmers, this ratio changes. up to 50 minutes of work and 10 minutes of a break. Usually, the time of continuous operation is calculated for a specific model and the volume of the fuel tank (from 0.3 to 1.5 liters).

2. Cutting tool. The power and performance of gasoline trimmers allow you to use a fairly wide range of cutting tools for work. This is a trimmer cord with a diameter of up to 4 mm, and metal circular knives with different numbers of blades for mowing not only any kind of grass, but also shrubs, and even a disk milling cutter for cutting small trees.

The properties and scope of the main types of cutting tools for lawn mowers will be discussed in more detail in the next publication.

3. Barbell. The gas trimmer engine has an upper position relative to the supporting hollow metal rod with a diameter of 24 to 32 mm. It can be either whole or collapsible. In the latter case, this facilitates storage and transportation, but reduces reliability. In some models of lawn mowing, instead of the lower part of the rod, you can install certain nozzles, turning the trimmer into a high-cutter, brush cutter, scissors, cultivator, edge cutter or blower.

Inside the rod is a metal shaft transmitting rotational movement from the engine to the cutting tool. It can be either direct (metal rod) or flexible (steel cable).

The straight shaft is more reliable and connects the motor to the gearbox, to which, depending on the trimmer model, the whole range of cutting tools can be attached. The bar in this case will only be straight.

The curved shape of the bar makes it easy to get to more inaccessible places. In this case, a steel cable is used as a shaft, and a mowing head with a cord of a certain diameter or plastic centrifugal knives are used to mow grass.

4. Lever. Depending on the intended field of application, gas trimmers are equipped with different types of handles. For comfortable operation, the handle can be moved along the bar and change the angle of its inclination.

Light lawn mowers, which are designed to work not so much longer as requiring good maneuverability with a frequent change of mowing angle, are equipped with closed D (O).shaped handles. The engine controls in this embodiment are located on a special handle running along the bar.

Read more:  How To Assemble A Starter On The Trimmer Video

When mowing tall grass and using a knife as a cutting tool, it is more convenient to work with a trimmer with a J-shaped handle. On some models, it comes as a replacement, complete with a D (O).shaped one.

For comfortable long-term work on mowing vegetation over a large area, the trimmers are equipped with ergonomic open T (U).shaped handles that allow holding the tool with two hands and the engine controls are carried out on their handles. With this trimmer, you can easily mow the grass, waving like an ordinary scythe-Lithuanian.

5. Belt accessories. A gas trimmer is not such an easy tool, therefore, to facilitate the load on the muscles during work, especially long, a variety of belt equipment is used. In addition to increasing comfort, its use will also protect you from “tearing” the instrument out of your hands when hard vegetation or branches of bushes get under the cord.

The easiest option is a single shoulder strap. But at the same time, the load from the trimmer will be only on one shoulder, which is not very convenient. A uniform redistribution of the load on both shoulders is ensured by a system of double shoulder straps, especially with soft and wide shoulders. Such belt equipment often has an energy-absorbing thigh pad designed to protect against vibration during lawn mowing.

To facilitate long-term work with a powerful heavy tool, special knapsack belt pendants have been created that unload not only the arms, but also the entire musculoskeletal system, effectively redistributing weight between the shoulders and hips. The belt adjustment system allows you to tightly fit such a snap for almost any pigtail figure. Particularly successful in this regard are the Balance X and Balance XT pendants from Husqvarna.

The benefits of petrol trimmers: