Converting a screwdriver to lithium batteries makes sense. The advantage is that they have a high electrical density. As a result, by installing such a device in the case of a screwdriver, we can achieve an increase in the duration of the tool by many times. The charging current for lithium high-power batteries, especially for new versions, it can reach 1-2 C. It is possible to recharge such a device in 1 hour, while not overstating the parameters recommended by the manufacturer and not spoiling the quality of the product. 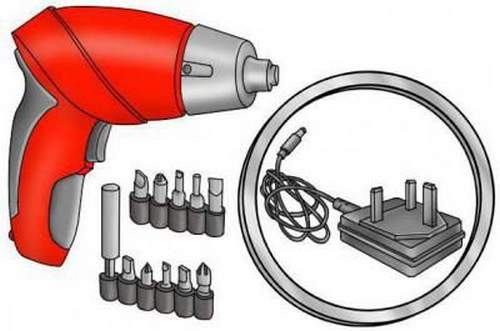 Most lithium devices are enclosed in a prismatic enclosure, but some models are cylindrical. These batteries use coil electrodes and separators. The case is made of aluminum or steel. The positive pole goes to the housing cover.

In prismatic configurations, the electrodes are in the form of rectangular plates. To ensure safety, the battery provides a device that acts as a regulator of all processes and opens the electrical circuit in critical situations. Increased sealing of the housing prevents the electrolyte from leaking out and penetrating oxygen and moisture.

What precautions should be taken to prevent damage to the lithium battery?

The article will consider how the alteration of a screwdriver on lithium Li-Po batteries occurs. The tool is equipped with a pair of Ni-Mh batteries with a voltage rating of 12 V and a capacity of 2.6 Ah. Alteration of the Hitachi screwdriver will be considered. Lithium batteries provide the device with a long service life.

First of all, you should decide on the choice of a voltage rating indicator for a lithium-based device. The choice should be made between the 3S-model (its voltage range is from 12.6 to 7.5 V) and the 4S-Li-Ion-battery (voltage range. From 16.8 to 10 V).

The advantages of the second option

The second option is more suitable, because the voltage in the battery drops quite quickly from maximum to minimum (from 16.8 to 14.8 V). For an electric motor, which, in fact, is a screwdriver, an excess of 2.8 V is not a critical mark.

The lowest voltage rating of the 3S-Li-Ion-modification. It is equal to 7.5 V, which is insufficient for the normal functioning of the electrical device. Having mounted four configurations, we will increase the electric capacity of the battery.

How to decide on the choice of lithium cells?

To select cells based on lithium, limiting factors should be identified. Currently, lithium devices are being manufactured with a permissible current load of 20-25 A.

Pulse current values ​​(short, up to 1-2 seconds) reach 30-35 A. The configuration of the battery will not be disturbed.

How many cells will fit in the case?

Collect 4S2P (four serial connections and two parallel) does not work. Converting a screwdriver to lithium 18650 batteries involves eight cells. How do they fit in four? Each cell will bear the maximum current load.

Video: Alteration of the Hitachi 12v Screwdriver to Lithium

How to determine the maximum current in a screwdriver?

Converting a 12V screwdriver to lithium batteries involves connecting the device to a laboratory power supply with a maximum current of 30 A. The limiter regulator is set to the maximum value. Having created the voltage level of the power source close to the nominal indicator of the future battery, we begin to gently pull the trigger. The current consumed by a screwdriver rises to around 5 A. Now you should sharply pull the trigger. This will short circuit the supply circuit. The current will reach a power of 20-30 A. Perhaps its indicator would be much higher, but the power of the power source will not allow this to be fixed. This will be a short load current with a sharp pull on the trigger of a screwdriver. Any model of such a device will react similarly.

How to choose a controller?

So, the screwdriver is being converted to lithium batteries. Regular charging for the device is required. When choosing a controller, note that the device must meet two parameters:

With the voltage, everything is very clear: if the battery is 11.1 V, then the controller will be with the same voltage.

The term "rated operating current" refers to the throughput protection of the board. Thus, the 4 A controller is designed for a 4 A current mark, and with an indicator of 8 A, an additional load is placed on it. In this case, the protective device will trip. All these technical data are stated in the passport of each controller modification. In this case, one modification may have a limit current of 30 A, and the other 50 A. And both of these devices will formally be suitable for operation. Also, when creating a lithium battery, there is a limitation in size. Therefore, you should purchase a controller that fits in the body of an old battery.

Converting a screwdriver to lithium batteries includes the following steps:

Installing the protection board

This step can show how lightweight the lithium battery design is. The weight of the Ni-Mh device was 536 g. The weight of the new lithium device is 199 g, which will be quite noticeable. We managed to win 337 g in weight. At the same time, an increase in energy capacity was observed.

The battery is mounted in a housing. The voids are filled with soft material from the packaging.

Connect to a screwdriver

How long does it take to replace batteries?

Converting a screwdriver to lithium batteries will take about 2 hours. If all parameters are checked, then it will take 4 hours.

Everything can be done independently, without the help of another person. But contact welding and the choice of batteries without specialized equipment can not be done.

How else can I test the degree of charge other than the controller?

Converted screwdriver to lithium batteries. Regular charging, built into the case, is ideal. But the cost of the controller is quite high. The device will cost 30, which is equivalent to the cost of the battery itself.

To test the battery charge level of lithium on the go, without using a charger, you can use the special RC helicopter lipo battery AKKU portable voltage meter tester alarm 2-6S AOK indicator. The cost of the device is very low. It has a balancing and charging connector similar to the iMax6. The device is connected to the battery through an adapter. This voltage level monitor is very convenient. It can measure from two to six lithium cells connected in series, and also give a total indicator or voltage of each element separately with extreme accuracy.

How much will it cost to replace a Ni-Mh with a lithium device?

How much money would an alteration of a screwdriver for a lithium battery require?

The price of such a device consists of the cost of several components:

It turns out that a self-made lithium battery costs 4240 p.

For comparison, we take a similar configuration from factory-made lithium. For example, a Makita 194065-3 device is designed for a screwdriver. It has similar parameters. The cost of such a device is 6500 p. It turns out that remaking a screwdriver on lithium batteries saves 2,300 p.