How much can you store gasoline with diluted oil for trimmer or chainsaw?

Many serious (solid, branded) manufacturers of various gasoline and garden equipment also produce fuel oil for them (for two-stroke engines).

Or work closely with manufacturers of motor oils.

These same manufacturers write about the shelf life in 14 days and no more.

Here it must be understood, they guarantee that nothing will happen in 14 days with the diluted fuel mixture.

But this does not mean that on the 15th day (this is for example) your trimmer or chainsaw will not start.

They will start and work, but there may be problems.

Problems can affect both the engine and the environment.

It is clear that manufacturers are insured and for sure this figure can be increased at least twice, that is, a month of storage of the fuel mixture.

Of course, you need to store it correctly, if it is a canister with a diluted mixture, then we store it in a shaded place, the container is tightly closed.

Before pouring the mixture into the tank, be sure to shake the canister well.

And of course the proportions of oil and gasoline.

It is also important to remember that both gasoline and engine oil have a shelf life (shelf life).

The biggest mistake users make is to leave the diluted mixture in the tank for the winter, but it’s better not to use such a mixture.

I would advise you to open the operating instructions for concert gasoline equipment, there is information on the proportion and shelf life of the mixture.

There may be nuances, manufacturers are different.

And I would also like to advise you not to breed "approximately", it is better to use a measuring container (capacity). 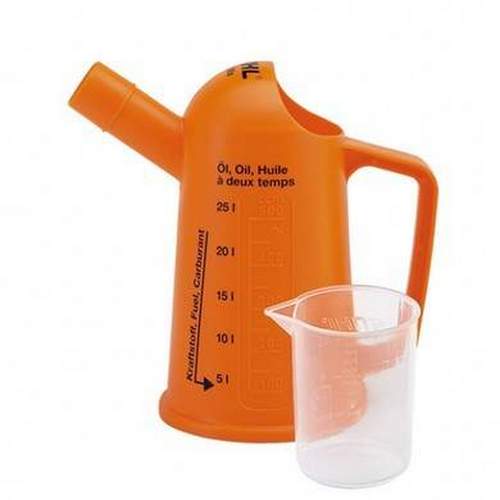 Many do not bother and use diluted gas until it ends, that is, after a season or even more after dilution. But as practice has shown, this is a bad experience. Gasoline engine works much worse.

It’s best to use it immediately after preparing the solution. But if you didn’t calculate a little, then it’s okay. Nothing will happen to him this season for sure. Well, for greater certainty, the residues can be mixed with freshly diluted gasoline.

It will also be useful for you to read:

Basically, all users of two-stroke units are divided into three groups, each adhering to its own firm views on the issue "how long is diluted oil"

The first ones are those who relentlessly follow the manufacturer’s instructions, and do not use gasoline that was diluted more than two weeks ago.

The second is those who breed a twenty-liter canister of gasoline for the entire season, for example, from spring to autumn.

Read more:  How To Cut Drywall At Home

And the third (to which I include myself) who do not fall into these extremes, and believe that the shelf life of diluted gasoline can be a month.

Two-stroke engines are chainsaws, trimmers, boat engines and the like high-speed internal combustion engines working on a mixture of gasoline and oil. Due to the presence of the latter in gasoline, the crank mechanism is lubricated, the piston stroke in the cylinder is facilitated.

The share of oil in the gasoline of many two-stroke engines (Stihl, Husvarna) is only 2%. In the volume ratio it looks like 1:50. 1 share of oil 50 parts of gasoline.

Generally familiar with two-stroke engines since childhood. motorcycles, saws, boat motors. And it was from my own experience that I deduced that diluted gasoline can be safely used for a month. Just store it in a dark, cool room, so as not to accelerate the process of decomposition of additives.

For saws, it is better not to use AI-95 gasoline. The most optimal option is AI-92, it has fewer detonating additives that accelerate the loss of lubricating properties of oils.

It is completely unacceptable for a long time (more than two months) to store a saw with gasoline residues in the tank! Gasoline evaporates and the oil remains, which makes the membrane responsible for pumping fuel sticks, which makes the saw either not start at all, or very difficult.

How much is diluted gas stored?

How long can I store petrol-diluted gasoline for a chainsaw?

How much can you store diluted gasoline for lawn mowers?

Is it possible to use diluted gas in a year in a Stihl chainsaw?

Shelf life of the fuel mixture is 14 days. This period is set by manufacturers of fuel mixtures.

Video: How Much You Can Store Diluted Gasoline

Shelf life can be increased, but this will only require proper storage. For long-term storage of the fuel mixture, it is necessary to completely eliminate contact with air and moisture, as well as to avoid temperature differences. Use only a dark place for storage. So you can save the fuel mixture from 6 to 12 months. But even with such storage, I would not advise you to use it after 14 days of storage.

Petrol diluted with oil is stored for no more than two months, without any serious loss of quality.

For push-pull engines, gasoline is diluted with oil to lubricate the crank mechanism. Himself gasoline can be stored for up to five years, but oil in gasoline can precipitate, and degrade the properties of additives in the oil. Ignition will take place after a year of storage, but the lubricating properties of such gasoline will be negligible and the unit can be destroyed very quickly.

Read more:  How to cut liquid glass onto an oval table

Do not use diluted oil in a year. It will be cheaper to buy a new one than to repair a Stihl chainsaw, or worse to acquire a new one.

As a last resort, you can dilute the old mixture of gasoline with a new, with a higher octane rating of gasoline and a slightly larger proportion of fresh oil.

The principle of operation of a chainsaw and lawn mowers is the same. The power unit of both is a two-stroke internal combustion engine. The working mixtures, for the most part, are the same. 50 to 1 (fifty parts of gasoline add one part of oil)

As has been noted more than once, gasoline garden equipment is more productive, powerful, efficient, and is not tied to electrical networks. At the same time, it continues to be the most expensive equipment requiring additional care. Mototechnics equipped with two-stroke gasoline engines certainly wins in the price-quality ratio in the line of garden equipment equipped with gasoline engines. One major inconvenience remains. this is a mixed lubrication system, so you need to prepare in advance mixture of gasoline with oil.

It seems that they estimated the amount of work, calculated it in advance, so as not to be distracted during the garden work, prepared the necessary amount of the mixture, but here either the weather failed, or circumstances changed. How to and for how long store fuel mixture for two-stroke engines, so as not to render expensive equipment worthless.

According to official recommendations of manufacturers of fuel oil for two-stroke engines with a mixed lubrication system, the shelf life of the fuel mixture is 14 days. At least such a guarantee is indicated by manufacturers of gardening oils Liqui Moly, Husqvarna, Motul and many others on the packaging of their products.

Arguments in favor of a long storage of the fuel mixture.

There are many examples on the Internet resources about at least six-month storage of fuel in tanks of motor vehicles, and its trouble-free operation in the future.

On these facts, the opinion is attached that information on a limited shelf life is ʺfeikʺ manufacturers, to increase sales of their own products. Half a month has passed, drain the fuel and prepare a new one.

During long-term storage of the fuel mixture, it is enough to shake the container with it several times to restore its characteristics.

Why the fuel mixture can not be stored for a long time.

With the fact that the shelf life of finished fuel for 2-stroke engines by manufacturers is slightly underestimated, I agree. But not by malice. By simply determining the expiration date, they come from the most unfavorable storage conditions.

In developed countries, much attention is paid to the preservation of the environment, and manufacturers create such oils so that after exposure to natural conditions they self-destruct under the influence of ultraviolet radiation. Those. storage periods in the garage and on the bright veranda will vary significantly. Carry out an experiment, and the different colors of the same mixture, after a month of storage, will be a proof of the unequally changed properties.

Read more:  Which battery is better varta or Bosch

Mineral oils are inherently more chemically inert, so before the question of storing the mixture did not arise so sharply. But modern synthetic oils have better properties and meet higher environmental requirements. They are biodegradable, which means that they are chemically quite active and enter chemical reactions with gasoline faster.

However, modern gasoline alone cannot be called a pure product, it has been repeatedly proved that the necessary octane number is obtained by adding chemical additives. Therefore, even “pure” gasoline will start to oxidize quickly enough, and even more so the fuel mixture.

Shaking the canister with fuel for two-stroke engines before use is undoubtedly necessary. But if the mixture stood for a long enough time, then the oil residue forms thick sticky deposits on the walls of the container, which are rather problematic to stir. Such a fuel mixture definitely needs to be disposed of.

Unfortunately, the molecular composition of the fuel mixture by eye cannot be determined. Therefore, I am a supporter of those gardeners who seek not to store the fuel mixture for two-stroke engines for more than a month.

How to store a mixture of gasoline with oil.

Separately in their pure form, gasoline and oil for 2-stroke engines can be stored within the expiration date specified by the manufacturer. Usually it is 5 years for oil, but this applies to hermetically sealed containers.

To properly store the fuel mixture, it is necessary to exclude its contact with air and moisture (water), as well as to avoid sudden changes in temperature. For long-term storage, it is advisable to use gasoline produced in the summer.

It is advisable to preserve oil and fuel mixture in shaded places in order to exclude the influence of ultraviolet radiation.

Both pure gasoline and the mixture are preferably stored in a hermetically sealed steel canister. This recommendation coincides with the opinion of gardeners who prefer not to drain fuel with garden equipment , and store it all winter in tanks.

In conclusion, all that has been said, the mixture can not be stored for a long time.