Repair of any machine should begin with preparatory work, and the STIHL 180 is no exception. In the preparatory phase, before disassembling the STIHL 180 chain saw, you must remove the side cover, the chain and the bar from the chain saw. Next, with a compressor and a brush, you need to clean the chainsaw of dirt, sawdust, oil residue and other.

When cleaning the chain saw, special attention should be paid to the place where the chain saw’s drive sprocket is located, t. к. this is the most contaminated area.

In places where there is a large accumulation of oil, you can wash with clean gasoline.

It is not uncommon that chainsaw manufacturers equip their units with starters that work along almost the same lines, namely: there is a handle in the groove of the saw housing through which a cord is passed. When the handle is raised sharply, the cord is also pulled out, which engages the ratchet drum. In this way, the ratchet drum, which is located on the shaft, is actuated. At this time, the crankshaft makes several revolutions, leading to compression of the fuel mixture, which at this moment is between the cylinder head and the piston. When the handle is lowered, on the contrary, the ratchet and the studs lose their contact, which causes the shaft to stop.

The most serious malfunctions for chainsaws are considered to be problems in the cylinder-piston group. Most of these problems result in an inability to start the engine because the pressure in the cylinder is dropping.

One of the most common causes of an engine that won’t start, throttles when idling, or runs with less power is that the crankshaft bearings are worn or broken. This is a pair of single-row deep groove ball bearings, which are located on the crankshaft halves. A stuffing box is placed on the bearing outer ring, which, in turn, seats in a suitable seat in the split crankcase of the engine and provides a hermetic seal. 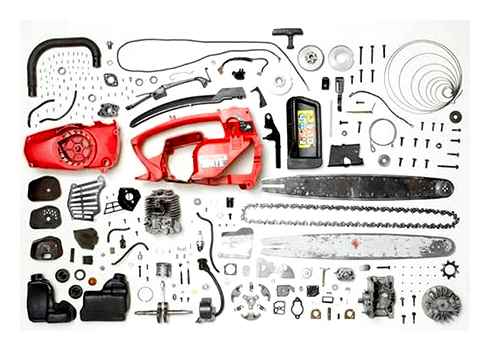 A typical sign of high wear of these bearings is not only engine malfunction, but also increased vibration. It is important to keep in mind that the crankshaft bearings are always replaced in pairs. regardless of which one has collapsed or failed. It is also worth taking into account that if the bearings were pressed on the shaft with interference (e.g., with one of the hot mounting methods), you need a special puller to remove them.

Read more:  Replacing the drive sprocket on a Stihl chainsaw

Some chainsaw manufacturers have a negative attitude towards attempts to replace the original components with some analogues, sometimes cheaper and not inferior in quality. For example, in Husqvarna chainsaws 230, 235, 236, 240 the crankshaft bearings are already pressed into the metal cage of the oil seal. It means that the owners of the tools of this brand can’t choose bearings of other manufacturers and have to buy only original components.

In order for the chainsaw’s existing lubrication system to give it away, the oil must have a suitable viscosity. Judging by the mechanics, the oil pump does not care what kind of oil you use: car, transmission or special. The main thing is that the viscosity must be within the established permissible range. However, this does not mean that you can pour any oil. The purpose of chain oil is not to save you money on buying it, but to lubricate the tire and chain parts. Different oils have different ways of doing this. But about that in another article, “Chain Oil. What to drink?”.

Additional recommendations for failing to work

If you have purchased a STIHL 180 chain saw, you will be able to troubleshoot and repair the tool yourself. Sometimes the machine doesn’t run because a cylinder fails. If there are bumps and chips on this assembly, it’s definitely the cause. If you encounter a problem where the tool won’t start, holds power for a short time, or stops after starting, the muffler may be at fault. It sometimes gets clogged with deposits from exhaust fumes in the course of use.

Saw sometimes fails to start, what happens if there is a problem with the starter motor. In order to identify the problem, it is necessary to remove the cover from the carburetor and a special screen, which is located behind the drum of the tool. If the catalytic conduit is loose from the starter, it can be reattached with a blowtorch. Sometimes the problem is an oil leak. In this case it is necessary to wipe the starter with a rag.

The starter for this kind of chain saw, and all other chain saws, is the carburetor. But as we speak today precisely about chain saw STIHL 180, then will not depart from the subject. So. The carburetor in this model has a single tuning screw, that is a kind of adjustment screw of the idle stroke. While the joker complete the full load is in the stationary state.

In simple terms, it can be said that it is simply not adjustable (see. here), while the full load setting simply can not change. The carburetor was fine-tuned at the factory so that regardless of how the chainsaw is operated the fuel-air mixture is supplied to the engine.

The STIHL 180 has a standard configuration. Like all modern chainsaws. Its components:

Gasoline engine that runs on a 1:50 mixture of fuel and oil.Has a capacity of 2 liters. с.

Read more:  Which Side To Put The Chain On The Chainsaw

Replacing the piston group on the STIHL MS 180 chain saw

Group :. Assembly and parts overview of the STIHL MS 180 chainsaw.

After the piston in the cylinder is locked, you can unscrew the flywheel nut. The thread in the nut is normal, so you need to turn it to the left. Loosen the nut, it is not necessary to remove it all the way, just unscrew it to the point where its upper edge is equal to the tip of the shaft, then a soft metal knockout is placed on the nut and a sharp blow. In this way, the flywheel jumps off the shaft from a sharp blow, and it can be easily removed without the help of additional tools.

The saw does not start: causes and solutions

There is either air sucked or something is blocked.

To troubleshoot the STIHL MS 180 chain saw, disassemble, flush and blow out the carburetor, change the fuel filter in the tank, check the fuel hoses for cracks (air might be sucking in).The regulating screw on the carburetor is the only one. the idle speed (sometimes, I turned it and the chainsaw worked again).The connection between the carburetor and the cylinder, in terms of air suction, is reliable. there is a plastic ring (no gaskets needed).

Right after you start, the chain saw is running at high rpm and when you step on the gas, instead of starting it accelerates, it “sinks” and even stops. Or it starts badly, doesn’t gain revolutions and shuts down (this malfunction also applies to other expensive chainsaws with a booster pump in the carburetor).

Cause of malfunction: The rubber sleeve on the carburettor booster pump (fuel booster) piston is worn. It leads to the air suction in the booster pump and the master fuel-air mix in the nozzle (there is not enough gasoline in the mix) and the chain saw works at high rpm and then “crushes” and shuts down. It happens after 2-3 years of operation and usually in the hot summer months.

Remove the carburetor from the chainsaw. Remove the gasoline pump cap with diaphragm by removing one screw in the center of the cap. Further turn the carburetor to itself with the choke, on the side where there are two holes, in one of them a pin is visible, here under it and there is a gas pedal pump. Remove the circlip from the outside of the pin and disconnect the wire spring from the air damper.

Shake the gas pedal (piston) and the spring out of the hole. The piston has a rubber sleeve (ring) that is worn and is the cause of the chain saw malfunction. You need to replace the piston and rubber cuff and spring (they are sold as a repair kit). Or you can take out the worn piston and spring, and plug the hole with a rubber plug (the chainsaw will be without a booster pump, t.е. it won’t accelerate in three seconds., but in 4 sec., but will run well because there will be no carburetor air suction).

Reassembly after troubleshooting chainsaw (after troubleshooting chainsaw carburetor) is done in reverse order of disassembly. When assembling the throttle, before tightening the screw, the throttle itself must be properly aligned so that it does not jam, and the threads of the screw securing the throttle to the axle should be degreased and smeared with a special thread sealant (sold in small tubes, red, liquid) or flattened with pliers, because if this screw gets out during operation, it goes straight into the cylinder ) and repair or replace the piston). Here we have looked at troubleshooting this chainsaw malfunction.

, It is worth noting the fact that the 180th saw of this manufacturer is one of the best in its “creations”, but also has its drawbacks. What we are actually talking about.

Short video instruction on how to replace the membranes in the carburetor of a chainsaw.

No chainsaw starts, plugs fill up, what to do? Contact Group:.

When the spark plug on your chainsaw fills up, you need to do a thorough check of the tool immediately.

Short video tutorial on how to change the diaphragms in a chainsaw carburetor.

First of all we should note the fact that this manufacturer’s chainsaw 180 is one of his best “creations”, but it also has its disadvantages. In fact, about which we will now talk.