Good day or night! Today I will tell you about the repair of the Japanese hammer drill Hitachi DH 24PC3. The tool is good-looking, has a futuristic look and good weight and dimensions. One problem – it does not turn on. Although once out of 10-50 clicks on the button, it spins for a short time. In general, there is a persistent feeling that the matter is in the switch.

First, we disassemble the punch by unscrewing several screws in the area of ​​the handle.

Pry gently along the seam and remove the handle cover. Under it, everything is rather sad – the dust from construction work during the laying of SCS (structured cable networks, in general a local network in Russian) was inside in all places.

Usually, this dust will damage the tool. Dust gets into the switch and the contacts inside it wear off faster. The same thing happens with the brushes of the electric motor, although they are considered consumables and can be changed quite easily..

Heavier with bearings, gear and impact mechanism – these are expensive components.

The punch switch has a complex structure – its diagram is often shown directly on the body.

The complexity is due to the fact that it is necessary to control a large power supplied to the motor, in addition, the winding current depends on the degree of pressing the switch button.

Therefore, a complex system of contacts was used inside and a thyristor was installed. In addition, there is a reverse switch on top, which does not make life easier for the repairman..

In general, the repair of such a tool often comes down to replacing the punch switch with the same or similar.

In the latter case, you have to specifically understand the connection diagram and select, taking into account the seat and the transmitted power.

I can say right away – I was lucky and I found exactly the same switch in my city for 800 rubles.

They offered a switch from Interskol, but the reverse lever on it was made differently and the button itself was wider. Here are several views of the switch for those who have the same rotary hammer..

In the end, I just took a new button and put all the wires on it in the same sequence as on the old one. Although there are a few schemes on the Internet in this regard.

Here is the connection diagram of the simplest button of a drill or perforator BUE-1.

And here is a diagram of a more complex drill button or hammer drill with a reverse switch.

Read more:  How Many Amperes Does A 12 Volt Screwdriver Consume

Approximately the same button is in the tools of Interskol, Makita, Hitachi and others..

I want to add an important feature when replacing a button – contacts with a latch are installed inside it – the wire seems to bite, so do not pull on the wire with strength.

There is a small hole next to the wire hole to release it. If you put the needle deeper there, then the wire will be released and come out easily.

As a result, we quickly change the button of our punch and go on to please the neighbors.

I want to remind you that another fairly common malfunction is the breaking of the power wire in the area where it enters the instrument case..

To solve this problem, simply cut the broken piece of wire and reconnect the remaining wire to the button. Blow out, dust off everything and twist back tighter.

On this, the Japanese Hitachi DH 24PC3 hammer drill was successfully repaired. SKSniki are happy, the walls are drilled, the neighbors are praying that everything is over.

Ask your questions about hammer drill repair on the forum or in the comments. 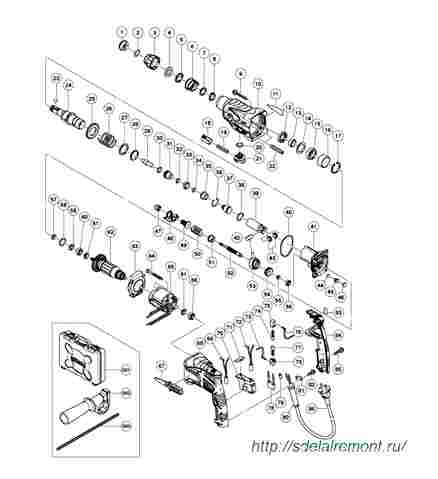 We disassemble the puncher step by step – quick search for breakage

Just imagine that your tool suddenly stops working or you urgently need to replace any defective part. The easiest way is to take the hammer drill to a service center for repair, but this takes time, which means it will stop your work for a while. But if you know how the device is disassembled, it will be much easier for you to carry out the rest of the work. In addition, this will lead to significant cost savings, because you will not need to spend money on paying for the services of repair centers..

Instructions for disassembling the tool:

Read more:  How To Choose The Right Hammer Drill For Home

Whatever breakdown awaits you, clean the case – sometimes it is dirt and dust that prevent the device from working normally.

Do-it-yourself punch repair – how to quickly fix a breakdown?

What you need to know about hammer drill repair?

Undoubtedly, the owners of such expensive equipment want their devices to be of high quality, to do their job 100%. First of all, the correct use of the tool will save you from serious damage, which we will talk about a little later. And, of course, the device was repaired on time. At the same time, any small failure should already become a cause for concern and preparation for repair..

As soon as something like this happened to your equipment, then it’s time to repair. Like any similar work, it requires care, understanding the cause of the breakdown and knowledge of how to cope with it. And your very first step in repairing is disassembling the tool into its components. For many, even this stage causes difficulties, and therefore it is necessary to know everything to the nuances – how, what and why!

Anyone who has ever had to work with a hammer drill knows how difficult its operating conditions are. That is why do-it-yourself punch repair is such a popular request on the Internet. And today we will tell you absolutely everything about the repair of this tool..

Punch repair yourself step by step

To repair a device such as a hammer drill, you should be as prepared as possible, which will reduce financial and labor costs to a minimum. It’s not bad if you are more or less familiar with the construction of a punch, you know what parts and assemblies it consists of, which will allow you to quickly replace a broken part. Most often, the repair of a perforator is reduced to a banal replacement of the “flying” elements, which include:

It is worth noting that it is easiest to repair light-class tools, given that such a hammer drill is perfect for carrying out construction work at home. But breakdowns of more serious equipment are much more difficult, and only professional craftsmen can handle them. In any case, no matter what class of tool you are interested in, find a model with a vacuum cleaner – this device will save you time for cleaning, and also make your work safer, since it reduces the amount of dust.

Read more:  How To Disassemble A Petrol Trimmer

Another problem is the breakdown of the windings, rewinding of the armature and starter, which also arise from dust. Repair consists in thorough cleaning and replacement of those parts that cannot be repaired. However, “prevention” is a more reliable method. To do this, you need to clean the device every two weeks, soak it with varnish or grease. By the way, the choice of a lubricant must be carefully considered. So, there are several rules. First, it is better to purchase a solution from the same manufacturer (Bosch, Makita, Enkor) as the perforator itself, in this case, the composition of the oil or varnish will be ideal. If such a composition is not at hand, a diesel engine oil is perfect for you..

The second most common cause of breakage is brush wear, no matter how much your tool costs – even the most expensive models are prone to this problem. Replacing them is very easy: we disassemble the perforator according to the above described scheme, find worn brushes and put new ones in their place. You just need to correctly determine which of them is best to use: coal, graphite or carbon-graphite. So, graphite ones have a long service life, however, due to the hardness of the material, the collector may suffer. Carbon elements are distinguished by a short life, however, they have high-quality contact with other parts of the hammer drill. The optimal and inexpensive is the purchase of the third option.. 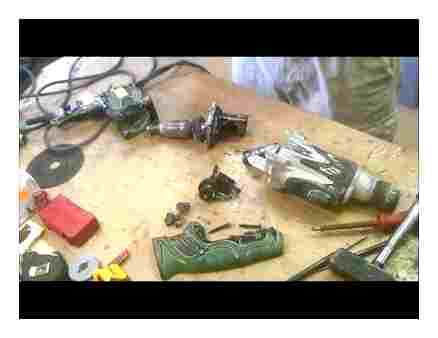 There are also problems with the mechanical elements of the device. Each model is equipped with switching modes, and they often fail, especially on cheap devices. The algorithm of work is the same – we disassemble the puncher, find the broken parts, replace them. The main thing is to purchase items suitable for this model. A similar problem often “haunts” cartridges that are exposed to maximum stress. First of all, protect them from dust and dirt by rinsing the elements with grease. But if the cartridge is still broken, we will have no choice but to change it..

Now you know how to fix a hammer drill and see that most of the breakdowns come down to simple cleaning or replacing defective parts. But if you disassembled the tool, and there are no apparent reasons, it is better to take the device to a service center – specialists will quickly find the cause and eliminate it.