Choosing a snow blower for the Neva power tiller

The Neva brand motor blocks are extremely popular among private farm owners. Reliable equipment is practiced to perform almost all types of agricultural work. In winter, the unit can be converted into a snow thrower (snow thrower, snow cleaner), which will help to manage very quickly with the cleaning of the site from snow drifts. It is necessary to mount your own hands a canopy or buy it in a store. Depending on the modification of the factory snow blowers for “Neva” motor vehicles vary in size and productivity.

One of the options for trailed equipment for this motorized machinery are snow blowers. The manufacturer has developed several modifications of snow throwers. All samples of snow mass gathering devices for “Neva” motor-block are auger constructions with snow mass ejection from the side (side ejection). The most popular types of this trailed equipment are considered several modifications.

A lot of people believe that this is the name of the snow thrower. In fact, “MB2” is a brand of power tiller. Snowplow is used as an attachment. “MB2” goes for other motor vehicles “Neva”. The structure of this compact head is elementary. The body of the iron body contains a screw conveyor. Welded spiral strips are used as blades. The snow mass is thrown sideways by means of a hose (snow thrower). The span of the snow layer capture equals 70 centimeters with a thickness of 20 centimeters. Discharge distance is 8 meters. The weight of the device is not more than 55 kg.

The auger conveyor device is different from “MB2”. Here, it is made in the form of a set of blades, resembling piled-up fan wheels. The toothed auger conveyor can effortlessly handle hard snow as well as ice crust. In terms of size, this machine is smaller than the brand “MB2”, but its productivity is not any less.

The snow mass is also discharged by means of snow discharge to the side at a distance of up to 5 meters. The snow layer grip is 56 centimeters and its maximum thickness is 17 centimeters. The weight of the device is at most 55 kg. When working with a snow thrower, the “Neva” unit moves at a speed of 2-4 km / h.

These snowplows differ in the structure of the working device. Brand “SMB-1” is equipped with an auger conveyor with a spiral strip. Grasp width is 70 centimeters, the height of the snow cover is 20 centimeters. The snow mass is thrown through the snow outlet at a distance of 5 meters. The weight of the device is 60 kilograms. 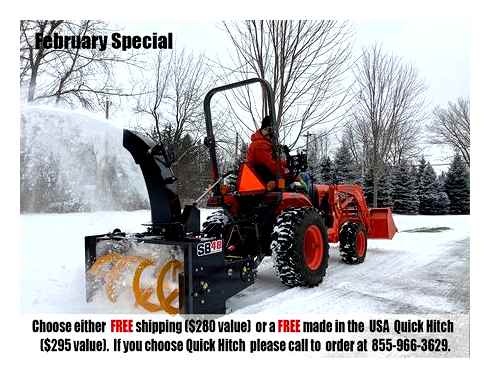 The SMB-1M is equipped with a toothed screw conveyor. Grasp width is 66 centimeters, and the height is 25 centimeters. The snow mass is also thrown out of the hose at a distance of 5 meters. Weight of the equipment is 42 kilograms.

The mounted rotary snow thrower has a metal body, inside of which there is a shaft. On the shaft there are auger blades of complex shaped steel sheet. The shaft is mounted in bearings, allowing it to rotate.

Inside you can see the rotor. Above the rotor there is a swivel spigot. It can be turned to any side. To attach the snow thrower, there is a hitch that houses the power take-off shaft (PTO) of the power tiller.

The torque is transmitted to the actuators. As the auger shaft rotates and moves forward, the snow is caught by the blades and moves from the periphery to the center. As the snow mass moves along the augers, it breaks down and changes its structure, so it will be easy to toss it aside.

From the auger pick-up mechanism, the snow flows to the rotor blades. This is where it converts its forward motion into a rotary motion. It is accelerated tangentially and is ejected through a nozzle to the right or left of the snowthrower’s travel direction. Here the operator directs the deflector so that the harvested snow does not interfere with the work.

How to make a snow blower out of a power tiller

On the Internet you can find many solutions to these issues, for example, we suggest you familiarize yourself with drawings motoblocheskogo scraper for snow with their own hands:

And now study the drawing of the rotary snow blower, there are videos on the Internet, showing and telling all the stages of creating such a canopy:

Analogues of other manufacturers

The analogue of the snow thrower for the MTZ motoblock is a snow thrower of the brand Agro, which has similar mountings. Its throwing range is up to 9 m, and its speed varies from 2 to 4 km/h. The model weighs only 50 kg and has a working width of 95 cm and a height of 35 cm.

Design and principle of operation

The left and right parts of the spiral rotor (auger) capture the snow and deliver it to the central part, under the ejection tube. There is another rotating element. the impeller, which throws the snow over considerable distances. A similar principle is used on combine harvester pickups and bulk material handlers.

Pipe, through which the snow is thrown, has rotary covers. They can be used to direct a jet of ejected snow in the desired direction.

The auger and impeller are driven by the engine of the power tiller via pulleys and a belt. Inside the mechanism itself, chain drives or bevel gears can be installed to distribute the torque to the rotor and impeller.

Here is a picture of a snow thrower working on a power tiller in a real environment. In this case, it’s an SMB Neva with a power tiller of the same brand:

There are skids (skis) on the edges of the hood. They have an up and down adjustment stroke which can be used to vary the working depth. If you lift the skids all the way up, the rotor will drop and pick up snow from the bottom. If there is a danger of damaging tiles, or catching lumps of earth, the rotor is lifted up.

When sweeping, torque is transmitted to both the wheels and the rotor of the machine. So the single axle tractor drives itself with the rotor spinning.

Cleaning can be carried out on rubber wheels with agricultural tread “herringbone”. If such wheels slip, there are two options: winding and fixing chains on rubber or the use of metal wheels “gruntzatsepov”.

a single-axle tractor with a dozer blade (shovel)

The snow is removed by plunging the bucket into the snow mass. The width of the passage varies from 70 cm to 1.5 meters. Rubber pads are attached to the side and front edges of heavy-duty buckets to reduce mechanical damage to decorative tile coverings and other easily destroyed materials hidden under snow drifts.

Shovel attack level adjustment available. The equipment is attached to the tiller with a crampon.

At home, the bucket is made from a piece of sturdy pipe cut into a semi-cylinder shape and fixed rods.

Rotary snow blower for a motor-block with their own hands: drawings and photo examples

Having a working single-axle tractor and drawings, a rotary snow scraper for a motorblock with their own hands. the task is quite feasible. Using the assembly diagrams, you can make the missing elements of the device and use the device for its intended purpose. When selecting a drawing for work, pay attention to the specified parameters of the product. Taking in hand the drawing, you will see that it necessarily depicts all the necessary parts with an indication of their size in millimeters. You’ll need sheet steel, a welding machine, and access to a lathe (or the ability to call in a handyman) for the job. 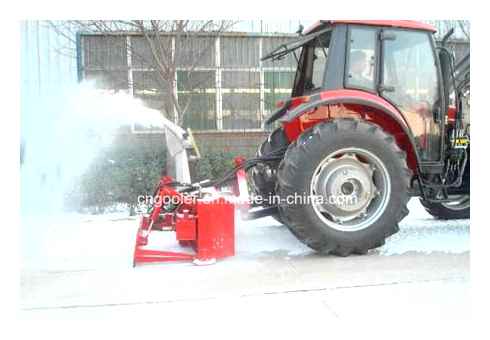 The main part of any snow blower is the auger. For its manufacture we use a tube and half-disk, made of sheet steel 2 mm thick. Disks are welded to the tube, forming a double-sided spiral in the right and left parts. In order for the construction to be strong, the welding points should be paid special attention.

Auger for rotary snow plow made by hand

The next step is to make the auger mobile. Ball bearings are used for this purpose 203. Using bolts and nuts, their bodies should be attached to the sides of the snowthrower. In this way, the auger will rotate and feed the snow, which cuts, to the rotor.

As the basis for the rotor is quite suitable cauldron of aluminum, with a volume of 20 liters. Using four-millimeter rivets, it is attached to the front wall of the body. So, getting into the drum, the snow will be thrown by the blades at a distance of several meters (usually 3 to 5 meters).

The snowblower body itself can easily be made according to the scheme, using steel sheets, 2 mm thick. Rivets 4 mm in diameter and M4 screws are great for fastening.

All commercially available attachments for power tillers can be conditionally divided by the method of attachment, form, principle of action. Depending on the design of the power tiller, attachment methods may be as follows:

According to the principle of operation, attachments are divided into such forms:

By design type, a single-axle tractor for snow removal can be: