How to convert an electric jigsaw into a table saw

An electric jigsaw is a very useful tool for households, it can be used to saw a board or a sheet of plywood. But it is very inconvenient and dangerous to saw something small with it, and sometimes it is necessary, for example, to saw a piece of foil-glass plastic board for making a circuit board. So what do I do?? Buy another table-mounted miniature circular saw or a table-mounted circular saw? It’s expensive, and I have to store one machine somewhere. But, for example, for electric planers, it comes with a special bracket that allows you to install it upside down. you get a table electric planer. 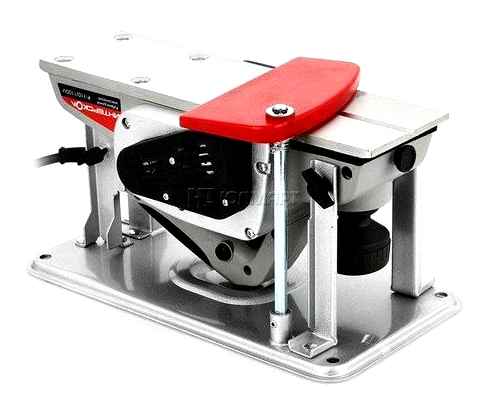 I have one. But I have not met such a support bracket for jigsaws, and in any case, my jigsaw manufacturer did not have such a thing. No problem, we’ll do it ourselves. Immediately I got the result: To make it I needed: a piece of thick plywood, three strips of wood, another piece of plywood, two metal angles, a screw with a wingnut and some screws. Two vertically mounted bars clench the jigsaw at the sides. The bar at the front and the plywood on the corner at the back keep the jigsaw from sliding back and forth. And for the exit of the power cord there is a shaped cutout in the plywood. There are 4 rubber legs fastened to the bottom of the base: The legs are made of pieces of vacuum hose, which for a change was not borrowed from the previous place of work (and they, hoses, there were some), but was in time taken out of the trash can under the window of the office iXBT.com. The rubber in this hose is soft enough, so the noise and vibration during the jigsaw work is well dampened, and the whole structure does not jump around on the table. However, the effort in the direction of the saw blade can still move the jigsaw, so in its front part was fixed removable angle, which when working rests against the end of the table. And again, a general view: Tests showed the effectiveness of this design, the machine when working, the machine stands as a pillar, hold it is not necessary, which frees up two hands for feed workpiece. The disadvantage of this design is that the power and lock buttons are available, but the speed adjustment spool is not. It is somewhere around where the arrow points: I just turned it up to maximum beforehand. However, if you want, you can make a hole in the base against the jigsaw through which to twist the speed. In addition, to make more or less perpendicular cuts was made guide device. It consists of a base plate and two guide angles. To one corner clamped workpiece, the second corner of the hands pressed to the bottom face of the jigsaw foot, also hands plane base attachment pressed to the plane of the blade. If you suddenly need to use the jigsaw in the usual “traditional” mode, it is very easy to remove it from the stand, it is enough to unfasten the plastic coupler (I took it with a lock, but you can also use a disposable if you do not plan to remove the jigsaw often). Yes, and of course, no protective guards in this design is not provided, so you need to be extremely careful and attentive not to saw off something unplanned.

Construction of an electric jigsaw machine

Electric jigsaw band saw is a household all-purpose device for making souvenirs, furniture, various interior items. There are many variants of making such machines. But the main elements, on which product quality and comfort in work depends, are the electric motor and blade.

Wood is a popular material that is often used in construction. To make a cut at home, you use band saws. homemade or factory-made. The article will give information, after which the reader will realize that the band saw made with their own hands performs the necessary functions not worse than the factory equipment. In addition, it is quite easy to assemble.

Electric jigsaw has long been a rarity or even a luxury, and he is almost always in the toolbox of almost all home and even more so professional craftsmen.

It is convenient, it helps to cut different materials, as well as relatively safe. Electric jigsaw is used for cutting curved shapes, closed or those that have a complex configuration.

It will be indispensable for most work on the arrangement of the house, as well as for the construction of plasterboard structures, various types and purposes of boxes and other works.

Advantages and disadvantages of the machine

Band saw with their own hands is made quickly enough. Naturally, you need to comply with all the requirements of the drawing and be precise. But first we have to decide whether it is worth it or not. To do this, it is necessary to be sure to consider all the pros and cons of the machine. So, among the advantages are the following:

Naturally, the band saw, with their own hands, which you can make in a few days, is not devoid of disadvantages. For example, with such a device you can only make longitudinal cuts, as its design will not allow to do anything else. In the process of operation, the machine can make a lot of noise and vibration. In addition, the device has a large size. If you decide to make such a machine yourself, you will have to use special equipment.

If you are not afraid of disadvantages, then such a machine can bring a lot of benefits to the owner.

If you calculate from what components added up the final cost of sawn timber. the price of wood processing transportation to the destination. it becomes clear what you can save. Wood blanks (plank, bar, slats) are some of the most used samples in the field of construction and repair.

Given the ease of working with wood, it makes sense to engage in its “dissolution” directly on the site. Enough to make a sawmill. With the typical drawings, the order of making with their own hands its band modification and some features of construction will introduce this article.

The feasibility of such a decision becomes even more obvious if you look at the rates at the sites factory sawmills. On sale they are available, but the cost of installations is such that most of us are unlikely to want to buy a model for use in the home. Depending on the model (in rubles): “KEDR”. from 138 000 to 194 000, “TAIGA”. from 116 890 to 172 400. And these are relatively inexpensive models. Cheaper only mini machines (about 94 000), but it is unlikely they will satisfy all the needs of the owner of a private home in woodworking.

Read more:  How to install a blade on a hacksaw

Always release saw tension after finishing work. This will prevent the formation of fatigue phenomena on its surface and prolongs its service life.

Setting up the band saw system

Efficient and high-quality work of the joinery depends directly on the adjustment of the equipment. There is a scheme for setting up the machine. First set the wheels parallel to each other. Then fluoroplastic washers are fitted, needed to prevent vertical misalignment.

The first start-up is performed without guides. At this stage they check the smoothness of the start and cleanliness of the engine work, and then conduct a test sawing with the blade, but with minimum loads. For heavier loads a unit with guide belts is used. Such a design consists of two halves, which are installed on the mowing line of the cutting blade.

In the past, masters with their own hands made not only machines, but also a cutting blade. It is difficult to close the band aggregate into a ring by yourself, and here you need at least some initial experience in assembling the machine. Manual grinding is also carried out using a template. All this can be done by yourself, saving your money, but the modern market is simply full of all kinds of devices and parts that improve the quality of processing materials or make the equipment multifunctional. The main thing in this case. remember about safety precautions, because the production models or homemade represent a great danger to human health.

Homemade band saw with their own hands

Any construction or major repair is unlikely to do without boards and various bars. In this case, all this material must be sawed to the right size.

Of course, you can buy ready-made boards or bars. But it will require a large financial outlay. Therefore, many home craftsmen and professionals prefer to do everything themselves.

And for this you need the right tool, such as a band saw. And in this case you should not immediately run to the store to buy a machine.

If there is a little experience, then you are sure to get a homemade band saw. And about the technology of its manufacture will be described in this article.